The little programmable robot is back, and this time it's mobile! Light-bot is a logic-based puzzle game that's been kicking around the browser scene for a few years in the form of Light-Bot and Light-Bot 2.0. Now the game has made the jump to Android and iOS, bringing with it several dozen new levels that will challenge your ability to program robots to light up blocks. That makes it sound a bit easy, but it isn't, we promise! 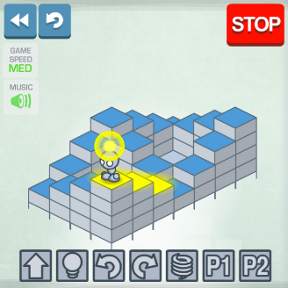 The goal of Light-bot is to create an instruction list that can move a robot around an isometric grid, switching on all blue tiles so they glow yellow. At the bottom of each screen you have a list of commands represented by icons. Tap or drag and drop commands to the panels on the right to assemble instructions, creating programs that move the 'bot forward, hop up a square, turn to the right, and so on. Proc1 and Proc2 icons let you set up macros so you can repeat common actions without repeating steps. You have limited space to complete each level, after all.

Light-bot has all of the same charm and challenge as its browser bretheren, and it works very well on the touch screen. Editing existing commands can be a bit cumbersome when you try to drag and drop between icons, simply because human fingers aren't (yet) transparent. But beyond that navigation is as smooth as can be. There are 40 levels to work through, 20 of which contain star challenges. Plenty to keep you up late at night staring at an isometric grid and refining your formulas down to perfection. And once you get into conditions, you won't be able to stop playing.

I really like programming games like this. The browser demo is a little laggy here though, and only runs in firefox here.