Taylor's dream comes true when the science student's number comes up in the lottery. No, not to win millions of dollars, but to fly aboard the space ship Varia, while performing experiments in space. The dream suddenly turns nightmarish when the ship crashes on a desolate, uninhabited moon, with no other apparent survivors. 3 Minute Games brings us a thrilling sci-fi interactive story Lifeline, written by Dave Justus. This choose your own adventure game for your iOS device (including the recently released Apple Watch) deliberately leaves gender out of the narrative, which allows the player's imagination to conjure up whatever image of stranded astronaut Taylor they want. (In my mind, Taylor ended up as a guy, something to do with the sarcastic humor reminding me very much of a friend of mine.) The interface is simple. Imagine you've got some futuristic data pad like they have in Star Trek, or, you know, an iPad, and you get an unfamiliar signal trying to hail you. There's no video, only text which scrolls down the touch screen. As your day suddenly gets entwined with Taylor's, the unlucky astronaut will frequently ask you for advice. When it's your turn to intervene in the story, just tap on the choice you want to make and read what happens next. Choose carefully, because your advice can drastically affect the outcome of the adventure. 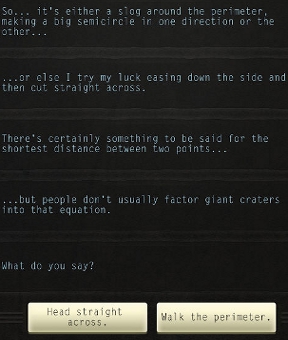 The unique thing about Lifeline is that it plays out in real time. After you've been in contact with Taylor and you mutually decide on a course of action, the game lets you know your new friend is busy, and will contact you later. This could be a few minutes, or a few hours, which produces the feeling that you are actually talking to a person, rather than just reading a story. If you turn notifications on, you'll get pinged when Taylor is messaging you. If you want, you can read it all and respond right on the lock screen without launching into the app. The excellent writing soon has you wrapped up in the story, leaving you anticipating what will happen next, and wishing you could move ahead more quickly. Luckily for those of us who are impatient, once you've played through a couple of times with real time speed, an option unlocks for fast speed. This allows you to skip long wait times, and to quickly skim over parts of the story you've seen before. Along with this comes the ability to scroll back up through the story and jump back to any decision you previously made allowing you to choose the other option. This is like when you were a kid and you'd keep one finger back on the page in your Choose Your Own Adventure book where you made a life and death decision. Then in case you ended up in the death scenario, you could flip back and make a better choice. It's a great way to be able to see more content should Taylor suffer an untimely death, without having to start completely over. Lifeline is a gripping tale of survival which will have you frequently checking your device to see if the plucky young scientist has checked in with you, and have you genuinely worrying for their safety if they haven't. With multiple endings, and tons of choices, the story will keep you engaged for hours, even if you play on fast mode.

This game was absolutely fantastic. I really enjoyed the story and I ended up getting quite attached to Taylor (who ended up as a guy in my head) But either way. I would highly recommend this :3

I also loved the story. But I thought of Taylor as a girl, weird

I just finished playing this on Android and overall thoroughly enjoyed the experience. However I ran into what seems like a bug when replaying the game and wanted to see what other people thought. I'll spoiler some of my comments in case anyone's reading who hasn't played the game at all.

So initially, amongst other things, my play through saw Taylor with

a dodgy ankle from crossing the big crater

and at the end

he was visited in the control room by all the crew and the captain in their new forms.

I replayed and made changes as follows:

- Bury the crew members near the beginning rather than just leaving their bodies.
- Left the generator plugged into the captain's life pod rather than unplugging her for the sake of the emergency beacon.
- Chose to walk round the crater rather than straight across it so Taylor's ankle remained uninjured.

Later on though Taylor was still moaning about

and at the end

the entire crew plus the captain came to the control room (even the captain should still be alive and the rest of the crew buried under ground).

So, did anyone else experience this kind of thing or just me? It basically ruined my desire to play through for a better ending than the one I got because there didn't seem to be much of a relationship between my choices and the final outcome.

Ok so i was able to safely finish this game in the first try. "Spoiler" taylor was able to get to the rescue ship safely but troutumaized. Then the've nuked the damn moon. İf you guys want the answers i can tell. Butt if you want to play it by yourself i have one thing to say dont waste your sources, don't waste time and always be sure to keep Taylor away from danger and injury.