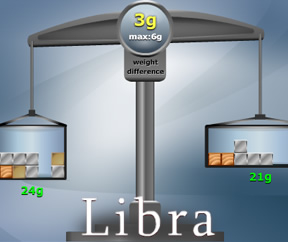 If you are a puzzle fiend instead of a stuffy stacker of things on top of other things, you'll find a lot to enjoy in Libra. A puzzle game that combines Tetris-style row matching with old fashioned block stacking, Libra is an exercise in lateral thinking. Not only do you have to consider block shape and size, but the weight of the material it's made of and what order you pile it on the scales!

Sitting in the queue are a number of block shapes and sizes, each made out of a different material. Using the mouse, pick up and place individual pieces onto the scale trays and watch how they tip with the weight. Now, place a block on the other side and watch what happens. You want both sides to balance out, which would be fairly simple if you could just count the number of bricks and call it a day. But no, Libra has to mess with your head by making some materials heavier than others. And no fair filling blocks with helium, that's cheating.

Each level has a weight limit that prevents you from loading one side with too many pieces. This forces you to be conservative with your moves, thinking before placing, and often undoing what you've already done so you can start again. In later levels, most of the blocks are heavier than the maximum weight difference on their own. This means you have to maneuver carefully from the beginning so that you can remove a row with pretty much every block. There's no timer, so you can really think about your moves and try different approaches. Every level has a perfect solution where the two sides are completely balanced, but the game also allows you to pass if the weight difference is under the maximum at the end. 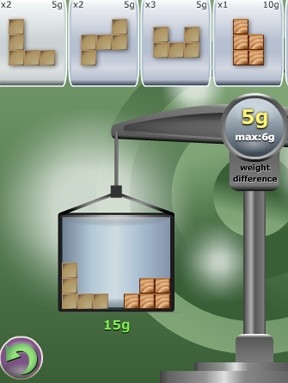 Analysis: NothingCasual has crafted an interesting little puzzle game with Libra. The combination of block matching and weight adds an extra dimension to your thinking, forcing you to consider exactly what will happen with each piece you place.

In later levels, blocks aren't always the same shape. Sometimes they're really long or extra narrow. This restricts how you can place them on the trays, as one move might eliminate a line you need. This helps keep the game from getting repetitive, as the levels can call for entirely different strategies. However, I'd still say this isn't a game that you plow through in one sitting. It's more like sudoku or picross, where you do a few levels, get tired of it, but then the next day you're feeling the urge to do a few more.

One thing Libra could use some improvement on is its user interface. Blocks must be placed precisely in their spots on the scale trays, you can't drop them into position. Now, this isn't a very big deal, but it constricts the player somewhat, forcing us to adhere to the game's constraints, even though Libra already throws a lot of rules our way. Allowing the player to use imprecise dropping (even though the outcome will be the same as before) would go a long way to opening the game up.

If you're looking for something different in the balance puzzle genre, Libra will provide you with 48 levels of puzzling goodness to really give your brain a workout.

Wow! Talk about a more modernized version of Tetras mixed in with weights and scales!

Nice game. Would be good to savour your victory when you complete a level - at the moment a banner pops up to block the view of your hard work.

Better for lots of short visits rather than a few long ones (as joye already mentioned).