"Oh no," you groan, staring unbelieving at your computer screen. Your favourite city building game has contracted some sort of strange glitch, preventing you from seeing the list of buildings and features you can choose from. The large plots of land before you remain empty, just waiting for paved roads and condo developments. What is there to do? You'll need to rack your brain and remember all of the buildings yourself, of course. This is the unique challenge you are faced with in Lexicopolis: A-B-City, a strategy and city simulation game like no other. Originally made for the 2013 Experimental Gameplay CONSTRUCT competition, Lexicopolis has remained well loved with consistent updates from developer vampirewalrus. The game is controlled with the [arrow] keys, as well as [Q], [W], [E] ...well, the entire keyboard. You see, you won't be using traditional money to fund this building project; your currency instead is the alphabet. Faced with a vast green field of letters, you are able to collect the letters which you've placed buildings upon and type out the features you want to build, from "apartment" to "zoo," in the style of Scribblenauts. Put on your thinking cap, because this open-ended word game has an impressive 300+ words and phrases in its lexicon. 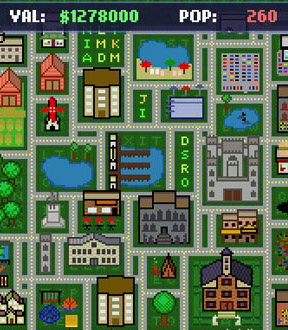 The rules that govern Lexicopolis really make it stand out as something different. Limiting the letters you can use provides a fun challenge—"House" seems an easy enough go-to until you realize you have little more than a T, an X and three F's at your disposal. As the game progresses this becomes less of a problem, though it's still easy to use up all your vowels if you're not careful. The point system is also delightfully unique, and since there are no specific goals or achievements to find here, you'll want to maximize that score as much as possible. Having too many commercial and recreational buildings in your town means you'll get a bonus for constructing residences, or vice-versa. Red multiplier squares litter the playing field much like a Scrabble board, so building and road placement matters more than you'd think. Finally, you'll get only half the points for any duplicates, so get creative; you want barbers and harbors, not just stores and... more stores. Your map will soon fill up, so think outside of the box to come up with teenier sized features that will fill up leftover spaces. In the grand scheme of things, it's a shame that there isn't more to Lexicopolis, but it's simple package doesn't prevent it from being both addicting and rewarding. Take a screenshot of your finished city and show it off. Revel in the joy of finding a really obscure word that works, or work with others to think of the buildings you're missing. It's much trickier than you'd think, and just one play-through isn't quite enough to satisfy. Plus, if you're feeling especially malicious, you can surround an orphanage with factories and junkyards. Don't breathe in too deeply, kids!

I'm curious to see what interesting words and phrases the community can find in this game! By far my personal favourite is (slightly inappropriate)...

words that don't work but arguably should:

There is so much potential in this game, it is easy to get caught up in all the words that we wish worked! Personally, I was disappointed when giant death ray didn't work, but maybe that's just because power goes to my head.

Hopefully we continue to see the developer update the game with more and more words. :)

My favorite words so far:

fortress
jail
dam (it's probably the counterpart to the before proposed reservoir)
mountain (whoa... and I though moving mountains was hard)

I do notice that there seems to be a case of synonymous words appearing as the same building though. Not sure how this reflects on the price:

There doesn't seem to be a win condition, other than beating a fixed highscore list (take that, Adam West). One can rack up several letters with large buildings that take up few letters.

I'm slightly annoyed that "FLAT", "APARTMENT", "HOTEL", and "RESIDENCE" all appear to be the same building.

In reply to both reichardblog and SonicLover: I agree that it's frustrating that different words sometimes result in the same looking feature.

is another example. However, I think that because they're still different words, you don't get any sort of point penalty, even if you have buildings that look the same. Don't quote me on that, though; I'll have to run some more tests to be sure!

Edit: My bad, I was totally wrong on that count. It's a bummer, but duplicates net you less points even when they're different words. Still, you guys have come up with some seriously great stuff that I never would have thought of, so in theory there are plenty of features to fill up the map without using repeats.

A few of my favorites:

And a big building in true SimCity fashion:

Some of my favorite words (that I've found so far):

does the same thing.

Maybe similar buildings show up under different names to give you a chance to type those buildings out when you're low on some letters?

What I need now is a list of what size each building is...

Here are some of my favourites:

So far orchard, airport, windmill, gate, and circus are my favorites. Treehouse was a surprise.

Fun!
I want to be able to scroll over my existing buildings and be reminded what each is!

and if you need something only 1 square try

For some reason delete doesn't work for me. I am on a samsung laptop. Any ideas? Seems like a fun game otherwise.

Hi Jamilworm! I'm afraid I'm not sure what you mean! The delete key isn't used in the game to my knowledge, though you can use backspace to cancel placing a building. If you wanted to get rid of a building that's already been placed, then yeah, there's no helping that unfortunately!

I'm sort of amused that

I'm kind of scared they have:

My favorite so far is

Hey, Joely; I appreciate the review but could you link to my game at GameJolt rather than gank the file and rehost it?

Before this article there was *one* unauthorized rehost, now there are *fifteen thousand*.

Sorry for any confusion. We certainly didn't intend to "gank" anything. Since the file was available at Kongregate, we assumed it was officially available for hosting elsewhere, like most other non-sitelocked games available on portals. We were unaware that the version Kongregate hosts is unauthorized. :(

'Sokay, and thanks for changing the link so quickly!