It's dark and raining outside, and Audrey's husband, Patrick, hasn't shown up yet. Running home in the terrible weather, she gets the feeling someone is following her. She waits up all night for her husband to return, but he never appears. Fearing the worst, Audrey goes to the police and files a report. They aren't too helpful, though, and when she finds a strange letter whose author knows more than they should, she begins to investigate the happenings herself. So begins Letters from Nowhere, a somber, challenging hidden object game that ditches the gimmicks in favor of pure item hunting and atmosphere. 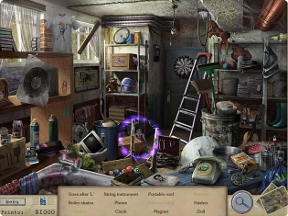 Letters from Nowhere is divided into easy-to-digest chapters, each sectioned into episodes filled with items to find. Click on a photo to enter the scene and use the item lists at the bottom to locate what you need in each area. Hints are available through a quickly-recharging timer, and if you click too many times without finding something, you'll get a hefty score penalty. Oopsie!

Some items in Letters from Nowhere must be "assembled" before you can collect them. This usually involves finding a missing piece and inserting it into the named object. So, for example, if you want to get the gun, you'll need to put a few bullets in the chamber first. You'll also encounter items that initiate instant mini-games, though these are rare. And, finally, keep an eye out for hidden stamps in each area. Find them all to unlock the Unlimited Mode at the end of the game!

While it doesn't attempt to fiddle with the hidden object formula too much, Letters from Nowhere features a bonus system that really is a marvelous addition. For every chapter of the game, you'll earn points that go towards unlocking these bonuses. The first prize, for example, is a thermometer. Use it and a thermometer will stash itself in every episode of a chapter. Find it in each scene and your cursor immediately becomes a hot/cold detector, alerting you when you're near an item you need to click. The unlockables don't last forever, unfortunately, but they shake things up and push the game along at just the right time. 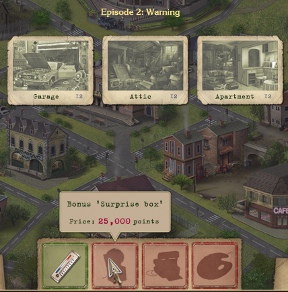 Analysis: Most hidden object titles try to attach gameplay tricks, storyline twists, and mini-games onto the core of the game like some sort of mad scientist. Really, all you need is good artwork, an interesting storyline, and unapologetically straightforward gameplay to capture an audience, something Letters from Nowhere is keenly aware of. From the title screen to the design of the loading screens, you can see how much care was put into the atmosphere of this release.

Letters from Nowhere is designed to tug at your emotions as well as provide some actual hidden object challenge. From the color palette to the soft music, you won't expect jumping clowns or flying confetti to hop out of any corner. If you're sitting inside on a rainy day with a Slanket, a cup of hot cocoa, and a slow Tchaikovsky violin concerto playing in the background, you've set the mood for this game. And as for finding the objects, Letters from Nowhere employs a smart stashing system that hides items without making them unfairly impossible to locate.

It's also worth noting that Letters from Nowhere features a strong achievements system in the form of trophies. There are over 35 trophies to unlock, each obtained by accomplishing a different feat you may not even realize you're working towards! Always a good excuse to find hidden objects with finesse.

A hidden object game at its heart with nothing more attached to the sides, Letters from Nowhere delivers just what the genre promises with a smart presentation and no-flaws gameplay.

Episode 5: There was a postman

Episode 5: There was a postman

The gameplay is well done but the ending is very disappointing.

Totally disappointed. have played many hidden object games but this one is not even fun. The writers are trying too hard to hide the objects and what should be challenging becomes a lesson in frustration.

It was the worst hide'n'seek game I ever played, that is because of the very stupid ending. I went very very disappointed.