Feeling like your wordsmithing skills need a workout? Look no further and try out Lettercraft, a fun new word game for iOS by developer Marco Torretta. The first five levels are free to try, and the rest of the game is unlockable via an in-app purchase. The goal is to make as many three or more letter words as you can before the game ends or the timer runs out. The letters you use don't have to be adjacent; you can use any letter on the board. Tap a letter and it will appear at the top of the screen. When you've spelled your word, swipe to submit it. If it's a valid word, you'll get points depending on length. The first letter of your word gets underlined, so if you determine you need to trash the word you were working on, just tap the first tile and it will disappear. Sounds easy, right? Well let me get to the twist: As you play the letters begin to heat up, eventually burning up so you can't use them. However, if you use the letters in a word, it cools them back down. But if you submit a misspelled or imaginary word, the tiles used will go up one heat level. If your board burns down to just three tiles left, it's game over. 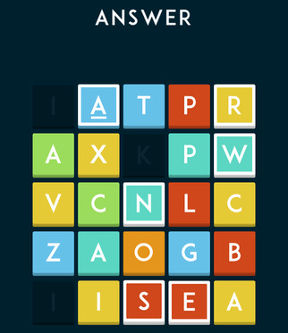 There are three different gameplay modes. In the regular mode you progress through 70 levels with point goals to reach within a certain amount of time, and are awarded stars accordingly. You can replay levels as many times as you'd like to try and get a high enough score for all three stars. While some levels accept any old word, others are more challenging, accepting only long words, or words with a certain letter in them or you don't get points. There's also a survival mode, where you play until all your tiles are burned up, and a multiplayer mode where you can challenge nearby friends via bluetooth. You can demo the first five levels of the game for free, or all of them can be unlocked for just a buck. Also available for purchase is a nifty stats tracker that watches and records your every move to see which words and letters you use the most, and average word length, among many other things. You can also get different color schemes to change the look of the game, though I would've like to see these themes unlockable via earned stars as well. Lettercraft is a nice crisp looking game with straightforward yet challenging gamemplay that's sure to scratch your word game itch.