Doubtlessly you remember Threes!, the addicting swipe-puzzler which gripped us all and influenced the mega-hit 2048. And hopefully you remember Triple Town, the unique match-three game with cute bears and an abundance of trees. These games were so popular and successful for a reason—they demanded attention and required some real planning. But let's play around with these formulae, shall we? Take the basic movement system from Threes!, throw in the rules and obstacles from Triple Town, and stick the grid in a series of finite levels... voila! The outcome is Letter Monsters, a well thought out and deviously cute combine-three puzzler from 1001.com. Presented with cute, colourful monsters labelled from "A" to "Z", your goal will be to combine sister letters to build your alphabet as far as you can. Three A's will make a B, three B's will make a C, and so on. Immovable obstacles and black holes will provide challenges, but certain special monsters, along with eight essential types of boosters, will help you out and make for some exceptionally fierce strategy. Playable both online with the [arrow] keys and on iOS or Android with the swipe of a finger, Letter Monsters brings a fresh aesthetic and a variety of new quirks to a now-familiar gameplay style. 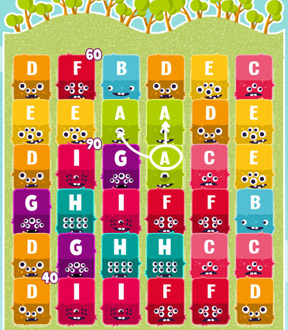 By dividing the gameplay into a series of separate levels, each with its own grid layout and specific win requirement, Letter Monsters really adds something special to the gameplay it builds off of. Instead of one frustratingly long sequence, the smaller levels allow for bite-sized gameplay during a lunch break or on the bus. For those who do crave the endless play style of past games, Letter Monsters features a thoughtful "continue" option which enables you to see each stage to its absolute end; continuing even becomes necessary to earn more stars and continue through the game. The three-star system and the variety of powerups adds a certain structure and progression to the Threes! formula which many will appreciate. The "booster wallet" is a great addiction akin to the lifelines from Who Wants to be a Millionaire, though be warned that any unused boosters, once taken out of the wallet, will not be saved at the end of a level. The control mechanism is also quite intuitive, though it certainly takes some practice; a swipe that is only slightly too short may result in all of your plans becoming instantly undone. All in all, Letter Monsters is a fun and well put-together experience that can appeal to anyone. The mobile app especially runs smoothly, though some have reported a few hiccups with the browser version. With over sixty levels to play through entirely for free, there's really no better way to practice your A-B-C's.

Got bored after world 2. I did not feel like playing any more during world 3. Maybe if it had an undo button I would have played longer; it is too easy to not hold the key long enough when it is three in a row. If you change your mind on what direction you want holding another does not change direction, maybe the touch version has this option. I have seen many other games that you could change the direction you chose before it follows through.

I do have to admit though I keep opening it up and playing it when I get bored.

Found a semi fix. If you are holding a direction and decide you don't want it to go that way hold another and release the one you want, but sometimes it makes the next block set.

Found a semi fix for a miss move. If you are holding a direction and decide you don't want it to go that way hold another and release the one you want, but sometimes it makes the next block set.

The levels do get more interesting, but they also mess up more. If you play for too long you get phantom blocks that block your path as well as combinations that are incorrect or do nothing. Sometimes even after you reload the game. Sometimes the pieces will not move, usually the last one and the game won't end.

Thanks for this comment SHA! We've fixed this in our update of the game, which we'll feature asap.

Also fixed the ghost-blocks in our update. :)

This game really helps me relax and unwind. It has a perfect balance of stimulation, simple but enough strategy to keep your brain occupied (so its not just random chance). Colorful but without flashy seizure-inducing effects.

There are still some bugs even after the last update. In the arcade, the V and W tiles are mixed-up. And you are stuck after you match three Z's and sometimes if you use a power-up that deletes the 'active' black.

Level 6.H seems impossible at first, but there is a way. Just keep the goal in mind. Here is my strategy:


1. Focus on matching three F blocks. You will get a swap booster, to help you finish the level.
2. Before unlocking the C-block button, use the wall made by the locked key-tiles to make a row along the Black Holes.
3. Keep a path open to the F-block, until you get another F-block from the draw pile.
4. Match D and C blocks until you get your third F.

One star is enough to open the next world, but I think three stars really is impossible.

Thanks for all the excellent feedback, Kathleen! I'm glad you are enjoying the game as much as I did. Some of those levels are extremely tough so thanks for posting some strategy here! Hopefully it can help a few people out!