Leo's Fortune has been stolen. His mounds of gold are gone missing and, in their wake, a trail of coins like breadcrumbs leads into unknown worlds. Hmm, some kind of mystery to be solved! Now join Leo and hunt down the thief through a breathlessly challenging platform adventure game, gorgeously hand-crafted by the talented hands of 1337 and Senri. Spanning from the moss-covered forest floor of his home, oasis-dabbled deserts, watery pirate coves, and further on to the indescribable depths beyond, this journey is an epic one. It's not an easy undertaking, but responsive touchscreen controls and smooth physics will help you guide Leo through all 24 levels unfolding with treacherous obstacles and mesmerizing beauty. 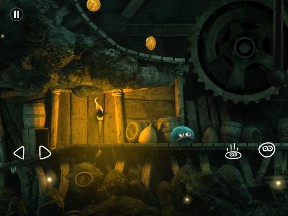 When you begin, a tutorial leads you through the motions: swiping and dragging the left side of the screen to move Leo this way and that; swiping, tapping and holding the right side of the screen to either propel downward or inflate for floating. If you don't like the touch method of navigating, select button controls in the option menu any time you need an easier go at it. Either way, you'll depend on these intuitively-designed controls to dash around stomping spiked hammers, log roll over fields of spikes, or fall through a crevice of spinning spiky wheels. Spikes are a big fashion hit this season, it seems, whether in snow, desert, forest or cave. As you soon learn, when you're a soft puff ball, spikes are not your friends. Especially not action-loving, swinging spikes blowing in the wind.

You can catch your breath between levels when Leo's story plays out in five acts: it's a good one but, since there is no such thing as "skip level" in Leo's world, the only way to solve the mystery of the missing gold is to reach the end. Most your gaming will be focused on successful platforming yet there are a number of puzzles to tease with your mind. If that wasn't entertainment enough, there are multiple achievements to strive for (here I gush huge respect to anyone who manages to complete all levels with full stars). There are rewards for collecting every coin, reaching the goal with no fatalities, and finishing quickly, as well as an optional quest to find the hidden golden gears. Stars earned open bonus levels, including the ending one. 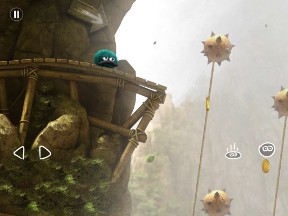 Analysis: Leo's Fortune exudes high quality in every detail, function, and element in the design. One look and it's obvious a lot of love and talent went into producing this impressive creation. The intricate courses might be death-spiked, but they'd make any theme park engineer jealous for how much fun they wangle. The visuals are similar to what you'd see in Samorost and Haluz, yet much more rich in detail, nearly photo-realistic. You'll feel as if on a free flowing adventure through a surreal fantasy world of natural environments that are enough to entertain throughout Leo's adventures, gratifying curiosity and successful gaming with new settings to behold. 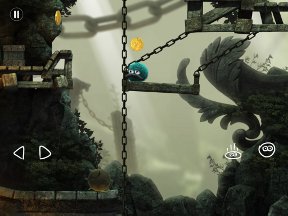 The aesthetics capture your attention, but it's the gameplay that's holding it captive. Leo's Fortune has more than a pretty face; it's clever and engaging. Dexterity and skill are well-rewarded here, yet don't shy away from the high difficulty tag; the levels are structured with accessibility in mind. Checkpoints come frequently enough to mitigate the angst of a fatal mistake although it's too bad there's no manual save or additional profiles; quitting before a level's end brings you back to its beginning when you relaunch the app. Skilled platform gamers will probably ask for more levels, but less experienced or less agile players could easily spend 6 hours and still never complete the game. Don't give up, you'll get there; the controls are responsive enough to rely on. Conversely, that wonderful momentum thrilling you while looping along one pathway turns into a curse when it propels you unwillingly toward death.

The likelihood of wiping out on a wrong move ramps up the stakes, thus the excitement, yet it's also frustrating to biff it 35 times in a row. Since even level 3 is no Sunday stroll, at level 10 it's hard to imagine how the challenges could become any more grueling. So, by Act 5...well, let it be said: there's dark days ahead for Leo (maniacal laughing ensues). What an insane-yet-delightful blend of frustration and enjoyment! With all that's going on, the lack of power-ups or special abilities is a bit of a letdown. It feels wrong to complain that this lovely-looking game with its adorably sweet-looking protagonist is mean but, well, it is. There is more than one instance in which a wish for momentary invincibility, time freezing or other super power turns into a desperate prayer. The path towards Leo's fortune makes the Temple of Doom look like Happy Kiddies Fun House. 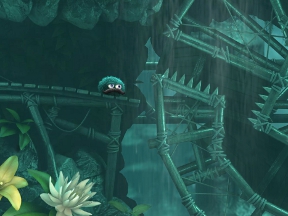 Okay, it's not at all easy. But is it worth all that effort? The answer to that depends on your answer to this: Just how much fun do you want to have on your mobile device? A lot? Then, well, yes. Leo's Fortune is worth the effort. You'd have to be a staunch player indeed to complete these death-defying feats without the corners of your mouth stretched ear-to-ear and realizing that "Aha! I solved it!" actually came from your own lips, not Leo's. Still, that's not to discount all the lip-gnawing cringes and sweaty palms filling in the gaps between such moments of glorious success.

Leo's Fortune is a game we'll bring up as a standard of comparison at the launch of other mobile platform adventures. It's that good. But it is also bad, bad as in wickedly difficult: so laboriously challenging that it's bound to evoke hate in some players. Even so, there's just too much to love to steer anyone away—natural physics and precise controls, stunningly beautiful environments with cleverly inventive designs, a well-crafted story, and immense replay value. Yes, it lives up to its hype. Leo's Fortune is a genuine treasure, a game for anyone who enjoys playing good games.

This game was awesome.