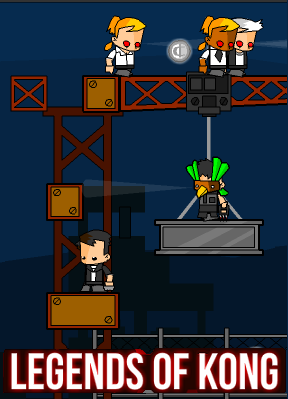 The city is under attack! Regular citizens have gone red-eyed with uncontrollable rage, security robots are running amok, mutants are smashing up storefronts, and sales of crowbars and health syringes are through the roof. Could it possibly have something to do with all those high-frequency broadcasting towers that the mysteriously menacing GlobalTek Industries have constructed all over town? Well, there's only one way to find out. Put together a party, load up on weapons, fight or sneak your way past the psychos and start causing massive property damage! Legends of Kong, new from Nerdook, is a randomly generated action-RPG that never plays the same twice.

Use the [arrow] keys to run and jump across the city's landscape, attacking with the [spacebar]. You must make it to the transmitter at the end of each level and neutralize it, before returning to your car. In your way are the red-eyed psychos, who will chase and attack if you walk into their field of village and will prevent you from leaving the screen until they are killed or enough time passes with you out of sight. It is up to the player to decide whether to be aggressive or stealthy. There are chests of cash to loot, new party member to rescue, and teleporters to activate, all activated with the [down] key. New upgrades and weapons are available for purchase after each successfully completed level. These can be equipped before starting a new level, and weapons can be switched while playing with the [Q] key. Bonuses are given for pacifist and kill-all-enemy level-runs. It's up to you to stop GlobalTek Industries from completing their vaguely defined scheme!

Legends of Kong is fun, can't help but suffer most by comparison. The whole feel of the game is quite reminiscent of Nerdook's earlier Zombies Took My Daughter. After all, it has the randomly generated content, doomed urban setting, and ongoing fight for survival. The problem is that there are areas in which the previous work is clearly superior, particularly in combat which here is much more repetitive. Still, Legend of Kong distinguishes itself by offering much more character customization and a tighter plot. Even with the elements of luck inherent in the design's premise, there's a lot of cool ideas here. Whether or not they all pay off satisfactorily will be up to the individual player, but most will conclude that Legends of Kong builds upon Nerdook's already impressive legend as a gaming experimenter.

I much enjoyed this one by Nerdook. :) Not enough to grind for every single purchasable upgrade, but it's well worth playing to the end.

I would suggest the following meta-strategy:

Hold out for Sarsy, a random character, who gets double stealth (cloak) time. You also want to buy the cloaking skill when it is available. This will allow you to beat all the levels with a Pacifist rating with ease.

For the Wipeout ratings, you want to use Jim who can't be killed. I suggest the double jump skill, auto-hacking when available, and the blade boomerang which has got to be the best weapon in the game.

For the final level, you can beat it entirely in stealth mode using Sarsy and hacking.

I loved 'Zombies Took My Daughter' and I love rpgs like crazy, so I was surprised to not be too hot on this.

I think the main thing was how incredibly short the levels were.

This game had shorter levels than 'Zombies took my daughter'. I don't know why that should matter, but it did.

The essence of an rpg is that they're a novel rather than a short story.

@sonicscrewdriver
If you get all red badges: buy all upgrades and get all pacifist (hurt none) and violent (defeat all). Then you unlock Overgrind mode (selectable at the screen before entering the level) which has harder enemies and longer levels.

I usually like action RPG style games, and I've liked most of nerdook's stuff in the past.

This, however... just didn't do much for me. The random levels were bland, shortish, and mostly unfun, and the upgrade system was very bland. (Tied to levels, everything costs the same, no prerequisites or feeling that you are developing a line of skills)

I can see where this was probably a fun experiment from a design / technical point of view, but, it just doesn't play well.

To beat the last dude, get the Gauss Rifle from the next to last scene. It shoots straight, long range, and heavy damage.

Then get the double-clip size. This gives you free ammo basically. Your first clip oddly starts with 1/2 the clip but all reloads only take 1 load and give double the ammo.

Then get the 1 second reload time skill.

You may optionally get the various Ranged Crit and other nice passive effects, but they aren't necessary.

You can also equip Pistol Whip, though I didnt find it necessary.

You may also use the Robo-Fist or whatever. It odesnt say it only applies to melee attacks, and will stack yet more damage.

Now, when level starts, blast away with Gauss Rifle. Quick reload ensures you have little downtime and keep knocking him back on hit. Double ammo ensures longer shooting time and plenty of ammo to finish off the boss.

Anything else that gets in the way dies quickly.