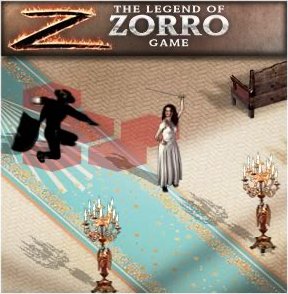 So you like turn-based strategy games, do you? Were you among the first to play Tactics Arena Online months ago, and still you can't get enough? Did you run through Spybot with nary an invalid checksum, only to crave more ever since? The wait is over.

Yes, it is another game created to promote an upcoming major motion picture theatrical release, but don't let that turn you off. This game is fun!

The object of the game is to reduce your opponents' health and eliminate them from play by using special attacks during a sequence of turns.

Attacking costs energy, so you can't attack during every play. Selecting energize will replenish some of the energy lost from attacking. Defend will reduce the impact of an attack from another player. Successfully attacking and blocking attacks from other players fills a "super attack" meter that will enable a new attack option when filled. When selecting a super attack, click the "lock" button when the orange and white moving boxes are as close together as possible. The closer together you lock them the stronger your "super attack" for that turn.

During play, special power-ups may appear on the game board to increase health, energy, or even grant a new weapon. Moving to that space collects the prize, but at the expense of your opponents knowing where to aim their attack. It's all about strategy and making the right choice at the right time.

That's the basics, and yet the best way to learn is to play a game and see for yourself.

How to start a game: The first time you play you have two options: create a user, or sign-in as 'guest'. Creating a new user doesn't require any personal information. It does, however, enable statistics tracking of your wins and allows you to compete for a spot on the leader board.

Once signed-in, the game room area shows an array of small silver and/or gold 'plates' representing rooms in which games are played. Gold rooms are waiting for players, silver rooms have games currently in progress. To join a gold room, simply click on one. A large sword will appear representing you. If you were the first to click on a room, then you are the creator of the game. If you joined a room, then you must wait for the creator to start the game.

If you are the only one in a room, you may play a game against the computer or you may wait for other players to join. Up to four (4) players may play a game at once, and this is where the real fun of the game begins.

If you created the game, click "Start game" to begin. The creator of the game gets to choose a character first: Zorro, Elena, Armand, McGivens, or Ferroq. Each character has its own special attacks and moves, so try them all out to get a feel for what each one can do. Following character selection by each of the players, one of three (3) game boards is chosen (small, medium or large), and then the game begins.

Summary: Zorro is turn-based strategy in an accessible Web-based package. Big Spaceship has produced another excellent game with a lot of multiplayer fun packed inside. Varied characters with unique moves, special attacks, power-ups, as well as a selection of game boards keep the action fresh and challenging. Four-player simultaneous play adds a dimension of melee mahem to the mix. A high score leader board provides incentive to succeed and be the best that you can be. Click.

Other games by Big Spaceship include the previously reviewed War of the Worlds, and The Grudge.

Thank you, Michael, for the link, and nice job with the game. =)

wierd game... really bad load times, even on a 9mb pipe...poor gameplay (unlike Tactics) and not enough intelligence, just hoping they move into your attack zone

How is this game any different from the Fantastic Four game reviewed not long ago?

I thought about Fantastic Four game too while reading this review. But then I tried to find review of it and couldnt, meaning either I am really bad at using search or it was not reviewed completely, only mentioned in multiplayer games post.

It's also identical to that 'Elektra' one...

I never played "Elektra" or even know what it is. How about a link, Wulfo?

Unlike Tactics Arena, this game is vastly more accessible to the casual gamer audience, and it features four-player simultaneous play.

If your attacks seem too random then pick a smaller game board and see if that doesn't force you to change up your strategy.

How about some constructive criticism, guys?

very good and very beautiful. keep this very much, and change animation music and colours

My main problem is that the attacks are not versitile enough. For example the linier attacks like the zoro hat throw can only go in 2 directions. This means that if you are in the wrong position you frequently can't use it. I realise that if you could hit evey square every turn then there would be a problem but as these games atand you can end up in situations where none of the players can hit each other at all.

The corrolorary to this is the dubious movement limitations. I'm guessing that there is an attempt here to make this a "bit like chess", but all it does is hamper the game play. If the movenent was more logical (Like all players can move 2 spaces per move) then this would at least alieviate some of the problems mentioned above.

So my improvements would be :

1) Since the game board is hexagonal have 6 different versions of each attack, not 2. If this means that some of the attacks need to be toned down so be it. At the very least a player should be able to hit every square next to them .

2) Simplify movement, as a basic each player should be able to move 2 spaces in any direction Standing one space from an item and not being able to reach it is very frustrating.

3) Maybe make the direction that you are facing have an effect.

4) Improve the game engine as I had it hang on me more or less every multiplayer game.

Still even if all the above was done I still doubt that I would like it much :-)

Bah, I was only able to play twice, nice, but it's more based on luck that on tactics.
Maybe playing many games agains the same opponents can give you hint on their tactic.
The attacks are not very well defined.
On my browser any time i finished a game I was disconnected and I had to relogin.
Many times I was not able to connect to any game (even the golds with noone).
Can be truly improved, but the idea it's nice.

Here's some constructive criticism: Fix it so that the game works on my machine. Or at least to the point where I can log onto those golden tables. I can click 'em, it makes the little *dink* noise, but it doesn't work...

I think the game works well, if not a bit slow. The annoyin gthing for me is, it doesnt record every win and loss! I have played about 20 games and my account only registers a win/loss/draw about half the time.

Your win/loss/draw counts are only updated if you play registered users. Playing against 'Guest's will not affect your counts.

It is an okay game, though I was only allowed one play (without having it added to my rank as a win I might add, the bosstones!), and now I am unable to get my beloved sword to stab in one of the blessed rooms. I think it hates me.

Also, I used some Captain Hook in a leotard guy whose attacks were pretty much longranged and in patterns that loosely resembled letters of the alphabet. I think it is the equivalent of the Fab 5 visiting Sesame Street...only with more jumping and some swords. Okay so it is nothing like the Fab 5 on Sesame Street.

Yes, Jay...it DOES make sense to me now! I don't know what all the negative comments are about. If your connection is fast enough it is quite a fun diversion.

I liked this one! And I am a registered player, and my name is, as always - rabbagast.

Lag and program errors that count as losses. This game will waste your life.

anybody know how to use cheatkey?
I want to attack with special weapon

There are things leave a good impression on human minds. The Mask of Zorro, a game, also is one of them. It's very amusing & enjoyable. You may also try.

I recently played The Legend of Zorro online game and noticed that many players are using some type of built cheat codes for the game. Can anyone provide information on exactly what the cheat codes are or where to find the information on the codes? Thanks!

hi rabbagast "! i see you are a regular player of legend of zorrro , but you see i am not able to play the game :(( . it says connection lost when i click on enter as guest or when i create an account . all it says is connection lost please somebody tell me a solution for this problem please.

i am the fifth best player of this game..when this game will resume??im tired of waiting.thanks