When martial arts and food combine, the result is something far more epic than that time you tried to slice through a cabbage in mid-air. Legend of Fat Ninja is a physics arcade game from Zephyr Games that tells the tale of

Kureijita, the ninja chef who just graduated from the legendary Iron Skillet Academy. Along with fellow graduate and sidekick Kaminoha, he's out to prove he's the best chef in the land. All he needs are a few good recipes, and he knows just the food masters to take them from!

Legend of Fat Ninja takes a very familiar physics formula and expands it into something much more interesting. Instead of knocking down objects in a horizontal plane, you have quests to complete, ninja moves to unleash, and impressively well-stocked and open levels to explore. It's kind of like a cross between Angry Birds, a pinball game, and a launching game like Nanaca Crash... with a fat ninja chef. 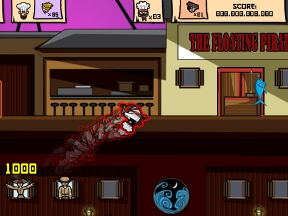 The goal of each level is to knock out the rival chef so you can get a look at his secret recipe. The obvious first step to accomplish that is to jump in a giant slingshot and fling yourself across the city. Kureijita moves through the air with surprising grace, and each time he crashes into an object he bounces off and earns points. Tap anywhere on the screen to direct a ninja dash in that direction, an ability you'll use as often as you can to attack food thieves and avoid hitting the ground. Once the rival chef makes an appearance, do your best to move towards him and unleash a few of those kicks. Eventually you'll gain his recipe and move on to the next level, thus taking one step closer to ninja chef perfection!

Analysis: Legend of Fat is one of those games you can pick up and enjoy right away. Better than that, though, is its ability to keep you hooked later on. Far from having one simple trick up its chef's coat, it'll take time to master the nuances of controlling a careening ninja as he flops about through the air. Because the game requires a modicum of precision, success doesn't always happen on the first try. Or maybe even the second. But keep at it and soon you'll taste the sweet soy noodles of victory! 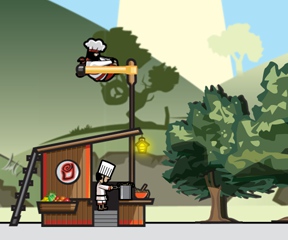 Variety is what makes Legend of Fat Ninja really stand out. That, and how odd the concept is from the get-go. With many physics games, you get a slingshot and some stuff to destroy, then you sit back and see how efficiently you can get it done. With Fat Ninja, you have a specific goal to complete and the destruction is simply a means to that end. Each level's construction is completely different from the last. Your starting point might even be on the other side of the map! The desire to see what awaits you in the next level is strong, so between that and your unquenchable thirst to master the game, you'll have plenty of reasons to stick with it for weeks on end.

Familiar in some very basic ways but undeniably unique in others, Legend of Fat Ninja has all the ingredients for a great mobile game. There are around half a dozen levels to complete and plenty of room to go back and fight for a high score. It's easy to play, takes time to master, has some genuinely strange characters, and features ninja chefs. That last bit alone is worth the price of admission!