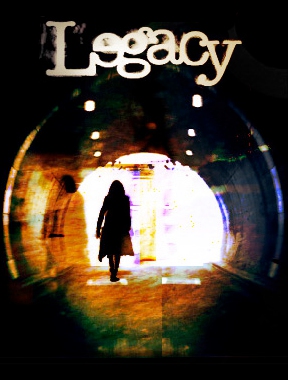 If you're younger than a certain age, you've probably never thought, "Wouldn't it be great if I could take part in my favorite radio dramas?" But the advent of podcasting has borne a renewed interest in all sorts of languishing radio formats, including radio drama (or "TV without pictures"). It's true, really! Now BBC and Radio Scotland bring us an interesting experiment in combining the audial thrills of radio drama with the interactivity of online gaming.
Legacy is a sound-heavy adventure game, telling a tale of secrets, cryptic clues, and underground vaults.

You control Harry, who with his twin sister Jules is clearing out the attic of his recently deceased grandmother Rose, when the two of them stumble upon a series of interesting puzzles that Rose, who used to play these sorts of games all the time, has left for her two grandchildren. Control Harry, represented on the neutral-colored map with a blue arrow, using the [arrow] keys. You can pick objects up with the [X] key, though you can only carry one object at a time. You may also examine objects with the [Z] key, combine two objects with [C], and otherwise interact with objects and scenery with [V]. The mouseless controls and limited inventory are a bit awkward but essential if you want to play without visuals, which you can turn on and off with the [spacebar]. That's all you need to follow Rose's trail of clues and discover what your Legacy really is.

Analysis: Legacy clearly had high ambitions to be an audio-only game, but had some obvious problems with the execution during development. If you wear headphones and turn the visuals off, you'll see what I mean. I'll say it again, with emphasis: PLAY THIS GAME WITHOUT VISUALS, at least at first. The game makes heavy use of binaural recording, a trick for making stereo sound appear to be happening in the space around you. Every door, cupboard, and object in the game has a looping sound effect associated with it, and with headphones you can actually hear where objects are relative to where Harry is standing and navigate accordingly, all without visual cues. There is no in-game reason to play blind like this, as Harry's visual acuity is clearly uncompromised; it's instead a clever way of taking control of a character in a radio play, which after all also relies exclusively on audio cues to tell its story.

Unfortunately the promise of an audio-only game is unfulfilled in this case. Navigation, as you can imagine, is very difficult with the visuals off. Inventory management is also a chore. It would be difficult to devise a sightless inventory system that didn't limit your carrying capacity as Legacy does, but the one-item rule means that you are constantly dropping useful items to pick up others, and finding where you left an important item is really tedious if you can't see where you are going. Perhaps there were solutions for managing these problems, but Legacy does not apply them. 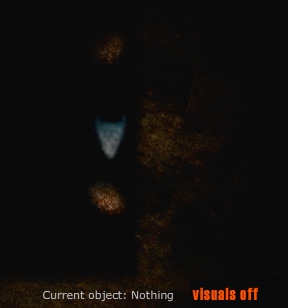 Thankfully, while the audio-only experience was less than I hoped, the story and presentation in Legacy are very strong. While the graphics are minimal, the sound effects and voice acting are very well done. There are some stilted, awkward moments as the game puts together prerecorded templates in some cases ("I found the...locked desk."), but the sound effects are evocative, and the voice acting is of literally professional quality (the actors are from a tied-in Radio Scotland miniseries of the same name). Harry's wont for glib self-narration is particularly effective in selling the mood of the game. The story, while hovering near cheesy, Dan Brown territory, is nonetheless intriguing, as you discover the many mysteries and secrets Rose has left for you. I wish some of the plot points were more fully developed or gracefully executed, but overall the tale is quite satisfying.

Legacy is a solid adventure game coupled with a clever idea for bringing radio to life. Sadly, that idea is found wanting in practice. Maybe someday an audio-only adventure game will successfully fulfill Legacy's promise, but until then we have a hint of that promise, with solid story and production in the package. Overall, that's a good bargain.

This game is immensely frustrating with items. I can walk so I'm facing (or backing) and object, but it is VERY hard to tell if I'm moving towards or away from it or even what the object is.

I played with visuals on; still annoying.
I'm stuck after opening the

The objects I have found are:

letter from Rosehas the password, which must be 3 digits...what is it?

I just don't see the appeal of this game at all.

Actually, I think this game is really interesting and original. I enjoyed it, anyway. I liked closing my eyes and visualizing things happening.

SkylerF, if you're still stuck, the 3-digit code is

There's another clue in the time capsule that gives you the code you need.

I've gotten all the way to what seems to be the last puzzle, and am stuck.

I'm fussing with the code for the self-destruct mechanism. I heard Rose's clues about thinking backwards and every letter there is a number. I recorded the letters as HHHA-BBIA-HHIA. I tried 198819221888 and 188819221988, neither with results.

Never mind, I just got it.

I overthought it. I was supposed to translate the letters into numbers without reversing their order. 888122918891. Talk about counter-intuitive.

I've got a cassette tape and a crowbar, and I can't find the cog for the broken generator, I've looked everywhere

Are you sure you've tried everything?

Use the crowbar to open the lift door.

There's a ladder inside

you can use the ladder to climb back up to where the other generator is...

The one thing about this game that really annoys me, so far, is the lack of the ability to have more than one item in your inventory.

Oh Lord. There has to be, HAS to be, a better way than loud, looping sound effects. I wanted to run away from things more than find them.
And I know there's a better way to deal with inventory than having your "blind" player be one-armed as well. A scrolling inventory with a sound effect or a comment on which item you're holding, maybe.

Actually, I'm stuck at the 3rd Chapter aimlessly guessing at the code for the door where you find the ladder.

I listened to the cassette already and it said something like "Caution 626" and "Family is important" and so is his birthday. But so far, no luck.

If I remember correctly, the code is Harry's birthday. DDMMYY.

This is a better game if you listened to the radio play, which follows Jules

Harry is so annoyingly slow! I quit in the second level when I had to walk from a vault to the first room to get an item, then walk all the way back, because it would take 3 or so minutes! WALKING THROUGH 3 ROOMS TWICE SHOULDN'T TAKE THAT LONG!!

So frustrating! I'm in Chapter 4 and my game keeps freezing when I:

All I get is the loading screen at full bar but nothing happens :.(

It's an interesting concept, but unfortunately, my hearing seems crippled. None of the auditory cues seem to help me in any obvious way (except when I'm standing right on top of something)(there's also a ton of background noise that I can't filter out). I have a very vague sense of direction, but I have absolutely no sense of distance. Part of it is probably due to the crappy earphones I'm using, but my biology is also pretty flawed.

It's a pretty tough game even with visuals enabled, as it doesn't let you see very far.

Thanks for the 'radio drama' shout-out... interesting concept, here, and I certainly appreciate any innovation in combining the lost art of radio drama with new media concepts.

That said, I agree with the analysis that the game still has some work to do... The game itself is a little silly and graphics are far less compelling than the audio.

I bet this would be really cool as a concept with high-quality visuals a la Myst, where you get audio to go with everything but not this pac-man like icon of a triangle that wanders around a thumping room.

Will keep my ears peeled for the actual drama...

Thanks for all the comments. I produced Legacy for the BBC and it's good to get feedback even if some of it is negative. As a pilot project Legacy has some flaws. The comments here will help us address those issues for future projects of a similar ilk.

If anyone's interested Episode 1 of the radio drama that accompanies the game will air be repeated at 11.30 BST on Radio Scotland. It'll be available for a week after that if you can't listen to it at the time: http://www.bbc.co.uk/programmes/b00thdkc

I'm confused. What are you supposed to see with the visuals turned on? I just see gray static (see screenshot below). It changes a little, even when I'm not moving, but I can'tmake anything out, even when I'm supposedly standing next to an object.

If you click on the button in the bottom right hand corner of the screen marked "visuals on" you'll switch to a top down view of the room with Harry marked as an arrow. Hope this helps.

I'm on the last bomb puzzle and I'm putting the code that SonicLover posted, but it isn't working.