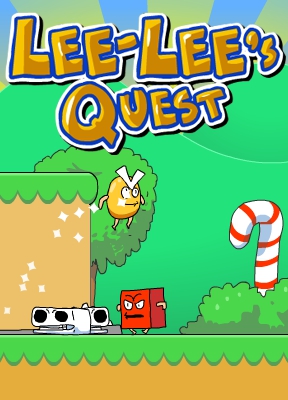 Platforms? Check. Roaming enemies? Check. Collecting stuff? Check. Bouncing pads? Check. Unrelenting sarcasm? Check. Wait, wha...? Apparently Marcus Richert never does anything the normal way. Just look at his new platformer, Lee-Lee's Quest. It's really not normal. Ironically this platformer is possibly the most normal platform game you have ever played; use the [WASD] or [arrow] keys to move as usual. Turn off all the sound and you might be fooled into thinking that this is a slick if unimaginative project where you run around navigating obstacles and picking up stuff. In this case you gather shovels, which your character has a bit to say about. In fact, whereas most platform stars tend to restrain their vocabulary to jumping grunts and whoops of gold star ecstacy, Lee-Lee has quite a mouthful (thanks to voice work by Joshua Tomar). Ditto for all the enemies roaming this platform world. Largely more geometric that the oval-shaped Lee-Lee, they clearly think the main character is some kind of a snob. He is obviously dillussional, as the intro video shows, but a snob? It gives you the motivation for any platformer's tried and tested weapon: bouncing on their heads.

It's tempting to call Lee-Lee's Quest a parody of platformers, but it doesn't delve that deep. Yet if you would settle for the idea of a comedy platformer, this is it. The banter between the characters and the ridiculous achievements make for a funny adventure. Even the last boss is a poke at overpowered final characters. Or maybe I was just terrible at trying to beat him. It doesn't matter; die a few times and the game gives you an out (but gets to poke fun at you). You won't be playing this for the gameplay, tight as it may be. Lee-Lee's Quest is more of a platformer doing it at the expense of the genre. In fact, start it in style; when the game starts and Lee-Lee awaits your movement commands, just hold back and do nothing. He's got a few things to say.

Actually, all I can do is get his initial commentary. Apparently, the keys don't work for me.

And yes, I know he has some advice on that subject.

Marcus Richert's nick is Raitendo. if you want to link to your reviews of his other games, like Action Turnip and Doeo.

I found this pleasant enough to play, and funny in places, but I wish the put-downs had dug a little deeper than "You're an idiot". Lee-Lee seems to be a kind of clueless violent stalker, but so few of the jokes are actually about that. The voice actor is so talented, I think there was potential for a really funny game if the writing had been sharper.

I don't think the last boss is supposed to be overpowered. I beat him without dying on the first try.

[Of course it is Raitendo. I've fixed the review and added a link to his tag page. -Jay]

I can't get the keys to work either...

@HeroForge - I had the same problem as well initially. It's a reported bug that, apparently, the controls do not respond in Chrome. I switched to Firefox & it worked fine in that browser. Really good game & humor. :)

Wonderfully fun game. The only complaint I have is missing out on some dialogue because I accidentally killed someone before it finished, but it demands multiple playthroughs, so no biggie.

Some of the achievements, starting in the top left:

Murder one of the old men in the huts.

Steal a shovel from one of the old men in the huts.

Jump over a starman and walk away without getting it.

Get a high amount of points.

8: Not sure. Maybe beat the game with the starman costume?
9:

Watch through the credits after beating the game.

Die a lot during the final boss.

Get a starman and crouch.

Lol, I love Raitendo and his half game half animations.

Kill every enemy (not including buzzsaws)

Wait through the dialog about the "your mom" joke, and then kill the guy after you forgive him.

Dying 5 times gets "Are you even trying?"

Dying 7 times gets "Whoo, this is pretty hard. Don't you think you could lower the difficulty a little here? I mean, seriously, you don't want the player to stop playing before 'e gets to see the ending, right?"
"%^&*st! Fine. I'll stop doing that attack pattern where I go left...and then right, shooting downwards. Does that sound good?"
"Yeah, yeah, that'd be great. Thanks."

Just a comment about the keys not working - it's actually a bug in the latest version of Chrome, where lots and lots of games coded in ActionScript 2 (as opposed to the latest version, AS3) don't work any longer (try the original Robot Unicorn Attack on the Adult Swim site for example). I'm hoping Google will put out a fix for this soon because none of my older games work in that browser any longer.

Oh. I got tired of dying at the final boss and I quitted before reading the bit of review about "getting an out" of that battle.

So, would a kind soul just tell me what happens in the end? Did the shovels have any reason to be at all?

Beat the boss naked (staaman) and die 27 times - there must be a non-boss enemy within speaking distance to get the achievement so for instance diving off the ledge at the start of the third stage will not do but running into the barrel enemy at the start of the fifth should be OK. Just experiment!

For some reason, I didn't get achievement 13. Do the shooter enemies on the final stage count?

Ha, love this, feels like a Mario game where everybody reacts to you when you appear, are naked, die alot, have newspaper and such.

It SHOULD be for dying over 27 times and hearing an enemy comment on it, but the code tries to trigger an achivement labelled "Lot" whereas the actual name is "sirDieaLot" - you'll get an entirely blank achievement box when you hit the right number of deaths, and it won't save the achivement. Fix please!

JDA - well spotted! This has been fixed (you won't have to be near an enemy either) and will be rolled-out in the next update (probably later today)

are you counting the old men when you break into their homes?

@OtherBill - yes. I killed *ONE* buzzsaw and none of the wall-mounted pill-shooting enemies.

Ah. The one level where you need the 2 cylinder enemies to pass the spike pits. I think that was it.

And Staaman says something different the second time you ignore him.

Achievement 8 - Where can you get a Staaman on that stage? Your player doesn't bring nekkid-mode along with him...

SkylerF - he does bring nekkid-mode (mine does anyway).

And the 2/3 speed that goes with it, makes getting to the boss with enough health to survive a huge pain :/

Marcus-thanks very much, really great to see dev that not only pays attention but responds to feedback really quickly!

Unfortunately the achivement is still not working for me - the same thing happened with the blank banner.

I think you've used different cases for the "S" of "Sir" in different places so it's still not triggering correctly - hopefully it's not just me.

also seems to be broken in the new update - I get a black square.

Finally, the boss failed to do anything at all (i.e. no speech) the last time I reached him, but that doesn't seem to happen all the time.

Sorry to be such a pain...love the game though, otherwise I wouldn't still be playing it to find these :-)

Oh come on! Achivement 8, for

doesn't work either, and I worked hard for that :-( The achievement seems to be named correctly this time, so not sure why it doesn't work. Well, *I* know I've 100%ed it anyway...

the ending check for naked mode is broken, it doesn't specify any particular object (i.e. Lee-Lee)

Final boss reminded me of Dr Robotnik from Sonic, LOL

And those who played the first Sonic games might thus realize soon that an effective way to beat him is to jump on the Boss and keep bouncing on him for as long as possible; he dies pretty easily if you do that.

I suggest jumping on him after he starts jumping on the ground, when he reaches the far left part of the screen; jump on him before he flies again, and keep bouncing on him for as long as possible; I managed to do it long enough to kill him quickly.

Now I'll have to do it again to gain all the achievements and see the "easy way out" LOL.
Not today XD

Looks like this is a really cool game. It's too bad AdultSwim.com has this ongoing issue with a "reference error : s is not defined" box popping up on every page and the game not loading. It obviously doesn't happen to everyone, but, from what I've seen in their forums, it's a known, persistent, and long-standing issue.

If anyone knows what actually causes it, I'd love to hear so I can work around the issue and maybe actually get to make use of their site. For the record, I'm a mac user, and this problem has been happening for the last several versions of OS X (at least from Leopard through Lion) and using Firefox from v3 through v5.

Thanks for giving it a shot, Jay. As I said, I'm mystified what's causing it. If you google "reference error : s is not defined" you'll see that this has been mentioned in AdultSwim.com message boards dating back to December 2009. There don't seem to be any suggestions for a permanent fix, though.

Thank you JDA, mighty kind of you. I've sent in a fixed version to Adult Swim and hopefully it'll be online before the weekend.

Hey, you know what this game is maybe a parody to "Adventures of Lolo", the blue round guy, captured girlfriend, block people. :) Still this game seems sort of original.

I don't see how I can beat the boss naked. I can barely stay ahead of him at full speed :/

Here is a screen shot of all the achievements unlocked