I don't know why everyone makes such a big deal over kids. They're loud and nonsensical, you have to share your toys, and their hands are usually disconcertingly sticky. But some people get pretty attached to the little anklebiters, so when the town in Mariaglorum's hidden-object adventure League of Light: Wicked Harvest sees two of the whippersnappers vanish, they call in a detective (you!) to help sort things out. It soon becomes clear that something wicked is afoot in the world's most sinister looking town, and you'll need to search for clues, solve puzzles and hidden-object scenes, and discover the truth behind the shadowy figure stalking the town's children. All with the help of gaming's most adorable sidekick (sorry Clementine). Seriously. Not even kidding. Stir it all up and you have one campy but immensely enjoyable game that features clever puzzles, an intriguing and even exciting plot, not one but two bonus chapters, and a widdle bitty scarecrow pal who tries so hard to be spooky and puts on widdle hats aaaaaaaAAAAAA- 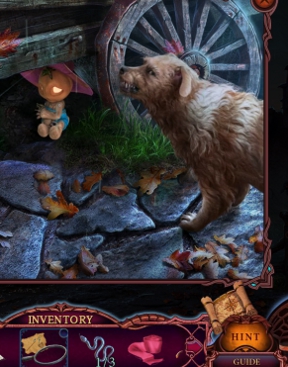 Let's get one thing straight... Wicked Harvest is not for you if you're the sort of person bothered by logical inconsistencies in gaming. Why is there rope for one half of a life-saving escape sewn into that seat cushion? Why is there a magnet on a rope in that bag of wheat? Did the person who put it there somehow know I would drop a metal screw down into a crevice? Why is a rug locked away in a chest, part of whose key is hidden inside an elaborate puzzle mechanism in the town wall? Why is the only person in this Irish town with an accent a Romanian gypsy whose son has no accent at all? What is haaaaaaaaaaappening? But then you put your cursor over your little scarecrowolantern pal and he reaches his widdle arms up at you and you forget all about that. Despite having a mountainous amount of backtracking and an overcomplicated escape from a burning building that should be accompanied by the wah-wah-waaah trumpet at intervals, most of Wicked Harvest is made up of fun, engaging puzzles with nice twists, like a wonderfully creepy game of hangman played with an Ouija board. The UI feels a little clunky, with a narrow inventory window that can lead to a lot of scrolling and accidental misclicks, but the story and characters more than make up for it. 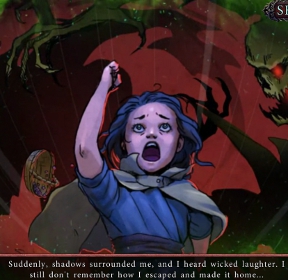 While all hidden-object adventures have a story, most of the time it's just sort of there, but Wicked Harvest manages to build a narrative that gets more complex the more you play. Aside from its endearing sidekick, who might have single-handedly reversed my sourpuss opinion on the cute sidekick trend in these games, the story has a sympathetic villain and a lot of exciting cutscenes, along with some great comic-style illustrated sequences that help provide the backstory. The downside is that, as mentioned, the sheer amount of back-and-forthery the game shamelessly indulges in bogs things down a great deal, so progress is a series of fits and starts. Though it takes a while to really get going, however, League of Light: Wicked Harvest is one of those games that just gets better the more you play. It's beautifully illustrated (though filled with an odd assortment of styles from CGI to classic pen and ink) and well voice acted, making it easy on the eyes and on the ears. League of Light: Wicked Harvest is just creepy enough but blends more fantasy and folklore into its story and setting than anything else, making for a hidden-object adventure with charm and character to spare.