Who doesn't love punching things? If you don't, it's probably because you haven't tried it on anyone who really deserves it, like people who don't use their turn signals in heavy traffic, or someone who doesn't think Earthbound is the best, or, you know, an evil scientist bent on destroying the world. Fortunately, if you're punch-phobic, Ravenous Games' Agent is here to do the job for you in their action-packed and fast-paced platforming game for iOS, League of Evil 3. Think you've got what it takes to punch evil in the face and save the world? You'd better hope so, since "what it takes" here means being able to dodge bullets, lasers, spikes, sharks, and a whole host of other nasty traps that require a whole lot of skill and speed to get past without turning into quivering, meaty chunks. 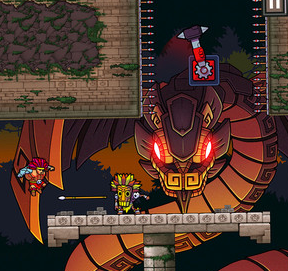 League of Evil 3 doesn't offer much different in the way of gameplay from the previous two installments... you're still tracking down a scientist and punching him in the face, as well as nabbing optional briefcases for highscores. Just like in its punchy predecessors, you use the two onscreen arrows to move left and right, and the [A] button to jump while [B] unleashes a mighty punch that will instantly destroy almost any enemy in your way. Of course, all it takes is a single hit to turn you into strawberry jam, so you need to be quick and deadly in order to make it to the end of the stage intact. Trust me, if you're prone to fits of rage, this is probably not the game to play if you don't have an impact-resistant phone case. (It's also worth noting that although the game ran on my first generation iPad, it did so with a bit of stuttering that made it even harder at times, so caveat emptor.)

While there are a few different obstacles, the biggest change from the last two games is that League of Evil 3 doesn't have a difficulty curve so much as a difficulty cliff that it boots you off of unceremoniously after only a single tutorial level. The complete lack of training wheels is something fans of the series who simply want more of a challenge will enjoy, since the levels jump almost instantly to sprawling and death-filled in a way that makes obtaining the best rating a serious accomplishment. Though the game still looks and plays as smooth as ever, the lack of any real innovation in the series from game to game means it definitely feels like this is a case of "third verse, same as the second and first", making it something fans will enjoy but possibly find a little disappointingly familiar if they had their fingers and toes crossed for something new and exciting. Though, really, anytime you get to punch someone who deserves it so hard they explode, it's a good day.