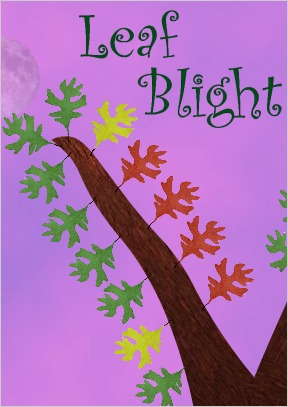 If you celebrate Arbor Day and always thought a logic puzzle was just what the holiday needed, then Grace Avery's Leaf Blight is for you. We're posting early in case anyone goes by the Belgian tree-planting day in Flanders, which is a month earlier than Arbor Day in the US. So get out those pruning shears and prepare to think.

Your task, should you choose to accept it, is to snip off the dying leaves to keep your trees healthy and strong. You only get a limited amount of moves to remove the leaves in the right order. Clipping off some will have an effect on the others, so you need to follow a simple set of logic rules.

Analysis: This relaxing logic puzzle starts out fairly easy, but does get more vexing as the levels progress. There is a tutorial and a nice slow paced learning curve to let you pick up all the rules. Leaf Blight lets you take your time, and gives you unlimited chances to resolve a level. For those craving competitive leaf cutting, there is a countdown timer, which will give you bonus points for solving levels under the time limit.

The graphics look a bit primitive, but they nicely evoke the feeling of woodcarving art. Small animated flourishes, such as a bird passing by or the moon waxing overhead, give the artwork some warm touches. The music is pleasant and adds to the overall relaxing feel of the game.

In the option menu you can turn off music and or sound effects, and there is a colorblind option, which adds symbols to the colors. If you'd rather create than solve logic problems, there is a level editor as well.

A series of bendy trees, mellow music and 60 levels of leaf picking madness await you!

I'll be honest, I would never have noticed this game if it wasn't reviewed here. I mean, it's a game about plucking leaves! How fun could that be?

... And yet, after just a couple of levels, I was hooked. I had no idea Leaf Blight was such a great puzzler! Definetly worth playing!

By the way, has anyone got past Level 31? Those cursed red leaves keep popping up on my tree!

Cool game, but I am totally stuck on 16. Help! Thanks.

Ah, the power of posting. I just wish I could remember how I did it so I could help the next person who gets stuck there!

I love saving the forest!

By the level 40s, you won't be able to win without

sometimes pruning green leaves. That will keep the red leaves from randomly making turning a leaf in the middle of a branch yellow, and it'll allow the whole branch to turn brown.

Could anyone please help on 29?

This game has 64 levels, in case anyone is wondering.

Great little game. I really enjoy the simplicity of presentation and surprising depth of the gameplay concept. Tough choices and strategically necessary sacrifices are always a plus when it comes to puzzle games! Level 60 is really hard, though...

58 is just impossible. Here's hoping the power of the post comes through...

Gah, That'll teach me to read the comments first.

I didn't realize you could prune green leaves. Knowing that, level 24 becomes a piece of cake.

Prune all the green leaves on the left first.

Imzadi, in case you're still stuck on L27:

For the first two moves, prune the red leaves that are showing on that turn.

Next prune the yellow leaves on the left.

Prune the red leaves on the right (let the purple leaves go).

Should be fairly straightforward from there on out--three moves, three groups of leaves left. :)

You have to trim all the green on the right branch when its upper side leaves turn red. That'll make sure it has a solid line of brown after you trim the left side branches.

Any help with level 15? I'm not sure how best to take out the purple leaves.

orange spot on the center branch first, then yellow. after that whichever one has the orange spot.

Please help on level 60! Its driving me crazy! I keep ending up one move short...

It's really annoying that the timer doesn't reset as well as the board when you hit reset. Granted, that may be the way the designer intended it, but it's frustrating when you finally get a solution and yet can't get the point reward for it because it wasn't your first/second/third try, especially on the later levels.

Start with the red leaf on the right

top left branch: the yellow leaf that appears because of the red one should be one of the two leaves to the right... this will help afterwards. Click and reset until you get it this way.

3/4 yellow leaves top left branch. (the ones I talked before..)

far left branch first because it can spread both directions

i absolutely cannot get past level 48...any help?

First three moves, for the yellow leave on the branches to the left

Play my custom level! Paste this code into the"Go to level" thingy:

I understand that the timer doesnt end the game, but it does seem odd to have a timer AND a move limit

It's usually good to get rid of whatever poses the biggest threat. So: red first, then the next to turn red, etc.

i am stuck at level 30 , can anyone help me? please

has anyone the full walkthrough, please, i am stuck at level 40

[Edit: Spoiler added - Please only post one time - comments are going through moderation and it might take a few till we see it. Thank you, Kayleigh]

There ARE 65 levels. I beat it. It gets rough at times, but keep it up.

Does anyone Know how to pass L8