The hero of Robert and Stephen Hewitt's ambitious action-packed platformer Last Legacy: Null Space was just minding their own business, defeating an unspeakable cosmic evil, when they suddenly found themselves sucked into another universe by a wormhole. And it couldn't be the Red Pepper Hummus Universe, or the Psych Was Never Cancelled Universe, oh no. It has to be the Everything From Ghosts and Crabs to Fire-Flinging Mages Wants to Turn You Into a Smear on the Ground Universe. To find a way home, you'll need to battle your way through hordes of nasties, unlock new powers and find beefy new equipment, and master a strange power that will let you alter the landscape around you. And I'm not just talking about the robust level editor either. See, pressing [shift] will activate your Delta Powers, which lets you place up to three blocks anywhere within range of the blue orbs, as well as remove up to three squares of natural terrain. Red orbs, however, will prevent any block manipulation around them, and figuring out how to work around them, or even just manipulate the blue orbs so you can get their sphere or influence where you want it, becomes the real challenge of the game. 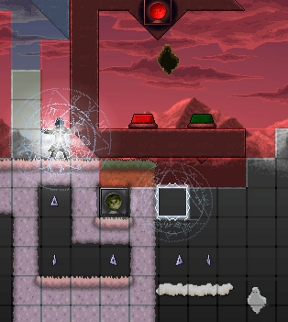 The default controls are [WASD] for movement and [spacebar] to jump and double-jump, but happily if you open the options menu with [ESC], you'll find they're fully customiseable to whatever suits your needs. Your goal is to make it through each stage intact, collecting golden triangles along the way to spend on equipment and upgrades between levels, and doing so usually involves kicking, stabbing, or magick-ing your way through enemies in your path. Finding your way to the portal at the end of the level is usually easy... it's figuring out how to reach all the treasure that takes some work. If you die, you'll be sent back to your last respawn point, and it's not just enemies that can do you in... falling into the nothingness between land and platforms is an instant KO. The game's downside, however, is that movement just doesn't feel quite as responsive as you might like sometimes, which is a big deal considering how much platforming there is, and how much of it consists of tiny platforms floating over bottomless voids.

That being said, Last Legacy: Null Space has a lot of good ideas, and the sheer amount of effort put into creating every pixel shines. Considering the team's long history with level editing following the release of the fan-made Super Mario 63, whose level editor portal is hosted on their site, it's unsurprising that they decided to make a game with level editing as both a function and a main gameplay mechanic. For the most part, this works very well, forcing you to think carefully about how to use your limited abilities to make your way around each area to every bit of treasure and upgrade tokens scattered around. The level editor itself provides a lot of options to craft your own creative stages, feels intuitive and simple to use, and sharing what you make is as simple as copy-pasting the code you generate. Most of the emphasis feels like it comes down to more on action than puzzle-solving, especially given how crazy some of the levels get, with moving terrain, switches, launch pads, and various flavours of ghosts. Though slow to start, there's a lot of variety the more you play, and it's a clear love letter to classic platformers that fans will recognize and appreciate.

Is clicking to kick necessary? My laptop does not allow the use of mouse and keyboard at the same time, so I do not know if it becomes necessary later, but I was unable to play the game. It made me sad because it looked great!

I've got the same problem. It allows keyboard and mouse if I use the arrows, so some games I need to use the arrows even though WASD is more convenient - but here that's not even an option.

Also why not have up be jump?

Respectfully, have you read the review? I mention specifically that you can change the controls under the options menu to whatever you want, including arrows. :)

Nope, because I came from the quick link at the top of the homepage, so never saw the review.

This game is frankly amazing!

Not optimizing the game for chrome? boo.

If you close the game window and come back later, it saves your progress and some options but the controls revert back to default. Mildly annoying. Heads-up for those of you who changed the controls and aren't playing the whole thing in one sitting.

eleventh dimension curiosity in hard mode.
how to get the Golden Triangle out of that building at right side??
I can't even move there.

You have to get the winged boots (hard mode last level, I think) and then upgrade them once.

When looking for the big triangles, you can

grab the triangle, then hit "return to Overworld" from the esc menu. You might have to finish the level first then go back and do it this way.

That can make it a lot faster for difficult triangles. Someone suggested farming cash by

going to the last level, in hard mode, and going up the far right side to grab the wing boots and exiting using the esc menu.

All of this gravity shifting is driving me crazy!

In the very first level when you fall down in the beginning, i can see two NPC:s standing in a house a few blocks to the right of me.

Is there any way to reach them?

I couldn't find this in the review, but this is actually Part 2 of a planned trilogy.

Part 1 is playable on lastlegacy.us, and their new version of Part 2 contains updates that has collectibles and such.

And a nice trick (Atleast in Null space):

You can reflect some of the enemy bullets with your sword.