The premise of Sigma Studios' physics puzzle Laser Cannon 3 Levels Pack is that monsters have overrun the world, but I'm not entirely sure we need to get Buffy or the Doctor on the line just yet since the monsters' main activities seem to be "standing around looking dopey" and "loitering in close proximity to things that could be fatal with just a bit of coaxing". Still, we've got ourselves a laser cannon as the title implies, and the only way to win is to find a way to electrocute, incinerate, crush, or otherwise render finito the creatures in each stage, using as few shots and as fast as possible. Just use the mouse to aim and fire, either directly at those hideous monstrosities, or using their environment to take them out. Some surfaces will reflect the laser beam, for example, while things like chains can be blasted through. Destroying all the monsters is usually easy enough, but doing so fast enough and with enough combos to get all three stars is another matter entirely. 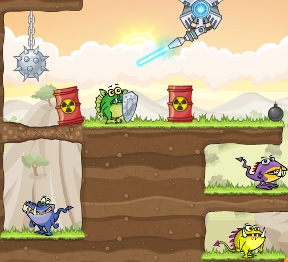 Playing Laser Cannon 3 Levels Pack is sort of a weird melange of "Wait for it. Wait for iiiiiiiiiiiiiit... " and "NOW NOW SHOOT NOW FOR STARS NOW." Timing and time-based scoring don't always go hand-in-hand together very well, so players shooting for the highest score need to first figure out the scoring as well as learn each level's layout like they're planning for the Kessel Run. The design of the stages themselves offers a lot of variety, not only introducing new elements like moving turrets that need to be charged with a laser blast, but also incorporating old ones in creative ways. Explosive barrel windmills! Reflective monster shields! All to reduce monsters to tiny little piles of cartoon ash with googly eyes a wah-wah-waaaaah away from being a Looney Tunes short. While it doesn't necessarily do anything new, its Rube Goldberg-esque level design, colourful visuals, and surprisingly challenging gold star demands make Laser Cannon 3 Levels Pack a satisfying little diversion for the monster slayer who can't be bothered to get out of their chair.

Thanks to Chris for sending this one in!

Is there a glitch on level 35?, impossible to get 3 stars

Leemondo: I even tried the walkthrough. It took twice as many shots as is allowed for a three star rating.

Hey Dora and Team,
Just wanted to say that this review reminded me again why I wish JIG had two rating systems, one to rate the game play, and one to rate the fabulous reviews.
Write on, JIG team!

Thank you so much! What a wonderful thing to read. I'm so happy you enjoy our shambling keyboard mashings. Comments like this make it all worth it, and we'll do our best to make coming here worth it to you, too.