One thing I've learned while studying various religious mythologies is that you should really try your best not to anger a god. Odds are if you do, if you don't wind up dead, you'll at least be needing some help. You are that help in Tilting Point Spotlight's unique blend of match-3 and word game Languinis: Match and Spell for your mobile device. After hours of fun naming all the things they come upon in the world, the bemasked Languinis get tired and start to laze around. Their phoenix god decides to punish them for slacking off by locking them in cages spread around various islands. It's your job to save them by using your superior matching and word finding skills. Swipe to match tiles of of the same color. When you do, they turn into letters. If you manage to match more than three, you'll get a bonus tile which when matched, will explode, or clear a line. When you have enough letters available, you can start to make words. Spell the word you want, then tap the green check mark to submit the word. 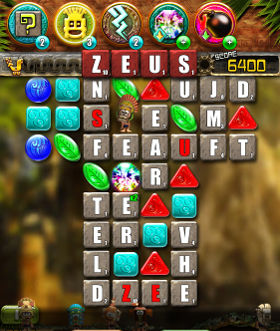 You aren't (usually) on a timer, so take your time to find the best move, which isn't always the longest word depending on your level objectives. If you spell something wrong, or you change your mind, hit the red X, or tap letters individually to remove them. Each level has its own set of goals, which include things like getting a certain score, matching a certain number of tiles, or finding words of certain length or containing a certain letter. These will be listed before you start a level, and also on the bottom of the playing field. All of these have to be completed within the allocated number of moves in order to move on. Complete the level in the fewest number of moves possible because you get major bonus points at the end for your extra moves. If you fail a level, you lose a life which will regenerate over time. If there's a right way to do a freemium game, Languinis comes close to it. There are bonuses, such as a joker tile, or block removal you can use to help you pass levels. These cost coins, which can also be used for extra moves at the end of a level. There are some ways to earn them in game, or you can pay for them, though there's never any pressure to buy and the game is perfectly playable without spending anything. You also don't have to bother your facebook friends, though that is an option you have. While match-3 games seem to be a dime a dozen these days, Languinis breaks the mold. The combonation of word game and matching game, along with the whimsical nature of the characters makes the game engaging and definitely one worth checking out.

Android:
Get Languinis: Match and Spell

I have my volume at 0 and while in another game it alerted (yelling noise) me with a sound so loud it vibrated my finger.

Oh and Qat (their suggested word) is a word, but not Xocotl