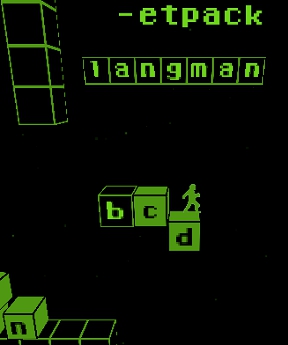 I have to admit, if I was ever sucked into a Tron-like computer world, I don't know if I would be able to handle the games they would force me to play. Since getting my motorcycle license, I think I could manage a draw in light-cycles, but Deadly Discs? Solar Sailor? Brawls at the End of Line club? I think I'd be de-rezzed pretty quickly. On the other hand, should the Master Computer challenge me to a game of hangman, I think I could take him. Such is the scenario presented by Langman, the new unity platforming word game from Von Lehe Creative. Oh... and while this might be a spoiler: ETAOIN SHRDLU is a good place to start.

Langman is controlled with the [arrow] keys and the [spacebar]. You move your figure around around the dark, box-filled landscape. When on a box with a letter on it, you hit the [spacebar] to select it as a guess for the puzzle hanging over head. If correct, it will light up and be added to the puzzle. If incorrect, they will drop out of place, and one of your "guesses" will be removed from the counter. Watch out... should you drop with it, you'll lose another guess. Other boxes without letters (and a couple of other shapes) will merely fall upon being selected. Sometimes these boxes will drop into the bottomless pit below, but if they land on something, they can then be pushed around to help or hinder your progress. A combo of correct guess adds to your guess counter. Collect bombs to blast boxes out of your way with the [B] key, and should you find yourself in an unwinnable position, an [R] key will reset the level. Complete the puzzle, and you'll move on to the next level. There are 16 in all. G--D L-CK!

Imbued with the greenish glow and beeps of retro-computing and the 3D aesthetics of the Unity platform, Langman is a treat for the eyes, ears and the mind. The concept is clever, the number and variety of puzzles is impressive, and while the game's mechanics are frustrating from time to time, it is the good kind of frustrating that makes you want to keep playing until you've beaten it. It's far from perfect: the randomness of the puzzles means that each level is easy or hard depending on chance (and indeed, a few seemed impossible at first without a bomb on hand) the physics are off just enough to be an annoyance, and the game doesn't really have a sense of depth beyond the novelty of combining such disparate elements. That said, the combination of run and jump with Wheel of Fortune works far more than it doesn't, and will make for an intriguing distraction for word and action game lovers alike.

You can also play the game at Kongregate.

Am I the only one having trouble with playing this game?
Looks like Kongregate are having some issues.. Can't play any of their games..

One level, about halfway in, requires a very precise jump just to get to the letters -- missing the jump costs you a guess and puts you back where you started. Falling off the letters puts you back to the start position, meaning you'll have to waste even MORE guesses trying to get back.

Coupled with the watery jump physics and letters placed in spots that are impossible to reach, this stage is probably going to be the cause of rage-quits all along the 'tubes.

Interesting concept, but the designer doesn't have a firm grasp of platforming level design.

Unlike the previous commentor I have no issues with the jump physics, you just have to remember to use the dropped blocks as tools and you'll be better off.

That said, level 15 is killing me, I'm hoping that with this post the solution will miraculously come to me as so often happens.

And it did, took me this long to realize that you can

Jump on the stars!

(Yeah, that stumped me too for a while. The first time I tried it, it didn't work.)

The "macwinlinux" tag needs to be changed to "macwin". Linux, sadly, can't run Unity. Guess I'll have to switch back to Windows later today so I can try this game out for myself. *sigh*

[Fixed. thanks for pointing that out. -Jay]

The place where you had to

drop a long vertical block, then tip it to the side and use it as a ramp

was a definite "A-ha!" moment.

Wow, thanks for reviewing my game!

@Tricky: Can you clarify what you meant by: "the physics are off just enough to be an annoyance"?

@HeroForge: I'm sorry you found that level frustrating. However, there is an easier solution. Check out the spoiler below if you'd like a hint.

Here are a few tips:

...you might find this (slightly outdated) trailer helpful. It contains glimpses of the solutions to certain levels.

Thanks for playing my game, and please post your feedback if you think something needs improvement.

I've tried dropping blocks in all sorts of patterns to build steps, but can never keep them stable and get them close enough. Then tried propping up long block. No dice.