Legends have told of the great warrior Kon, a cursed Enkian, who, with his strength and skill, saved the fair Princess Narya from the evil King Blazer, and saved the land of Naturia. Unfortunately for Kon, that life of ease he earned in the last game seems to have been revoked by the fates, as he has found himself shipwrecked on Drumdrum Island, where it just so happens that the evil ice witch Merody wishes to bring about an eternal winter, Kon is the only one who can stop her, and the local shopkeepers don't seem to be accepting his Hero of the Realm discount card. Isn't that always the case? But adventure calls, and there are baddies to fight, and treasure to swipe, so Kon had might as well enjoy himself. Land of Enki 2 is a retro-style action-platform game by VoidForce where players will travel to an engaging fantasy world, discover fascinating creatures, then slice them in half with a sword, because what else? 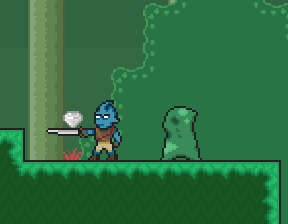 Move left and right with the [arrow] keys, and use up and down to climb and descend ladders. You'll jump with [Z] and you'll use [X] to attack the various baddies in your way, while avoiding their attacks and other hazards. You have a limited supply of bombs that can be thrown with [C], perfect both for taking out baddies and opening secret passages. Collect gems from baddies and treasure chests to spend at Sheedadeep the Shopkeeper's store for things like extra bombs, health restoring potions (that can be used by hitting [D]), and various trinkets that can be equipped on the pause screen. Beat all the levels in all four zones, and the island is saved! Land of Enki 2's look and mechanics are reminiscent of those DOS platformers of the mid-90s that used to fill up shareware CDs, but in a good way. Kon isn't likely to give Commander Keen (let along Cactus McCoy) a run for his money, but his game's sequence of short, simple levels are perfect for people looking for a game high on atmosphere but low on challenge, apart from the somewhat frustrating ladder-jumping. While the whole thing would probably work better as a sprawling metroidvania game rather than a series of disconnected parts, it's clear that VoidForce is having a lot of fun putting together his world as he develops his gamemaking skills. Land of Enki 2 is a definite step in the right direction... not perfect, but fun, and something that makes me interested to see where Kon is going next.

This is a fun side scroller.

A few too many buttons for my liking, I was constantly throwing bombs by mistake when I wanted to use sword.

A duck function might be nice for when you reach those things that spit darts? And the ability to have more than 4 health max?

I was picking up red hearts left, right & centre.
Could have done with double or triple the amount I was allowed.

I feel bad for the guy who's trying to sell bombs and hearts when every tuft of grass contains them. What a lousy business to be in!

Ladders, Why'd it have to ladders.

Does it have an ending? I've beaten all the levels and collected all the chests and potions, but I haven't gotten any ending...

Person with URL for name: You do get the ability to have more than 4 hearts! When you beat bosses, you pick up a little red potion that adds a heart to your health pool. Also, the merchant sometimes has those red potions.

I'm just sorta stuck in the same situation yunruiwatts is, I beat everything but there doesn't seem to be an ending!

zone 2 level 2
I got a heart on the right, the left seems empty

zone 2 level 4
1 at the beginning
2 below the ladders
3 you go up the ladder, next area. below the two little enemies, to the right of the large enemy

If you stand next to them two pieces blow up where as if you are farther away often only 1 and you have to use more bombs.