Please note that Lakeview Cabin Collection is an episodic game. As of this writing, only the first installment has been released. Purchasing the game gains you automatic access to all other episodes in the future.

Roope Tamminen's Lakeview Cabin was a surprise hit in 2013, a deceptive little browser game without dialogue or direction where you played a man at a peaceful lakeside cabin who discovers the place gets very different, and dangerous, when the sun goes down. Players adored not only the campy, old-school horror themes and styles, but the free-roaming gameplay... it was entirely up to you to figure out what to do, and there was a lot you could do just for the heck of it, like skinny-dipping. Now you can go back for more with Lakeview Cabin Collection, a paid indie download over at itch.io, which, as of this writing, contains the first of several planned "episodes". (You'll automatically gain access to the other three chapters when they release!) The premise is the same, though the set-up isn't, this time framed around a movie theater showing a variety of horror films you end up taking part in. Though you can explore the theater as different characters and find secrets there, the bulk of the game resides in the cinema showing Lakeview Cabin III, where you suddenly find yourself in control of a group of people partying it up lakeside at a sprawling campgrounds. They're actually the new counselors, ensuring everything is ready for guests, but there's just one small, murderous problem... 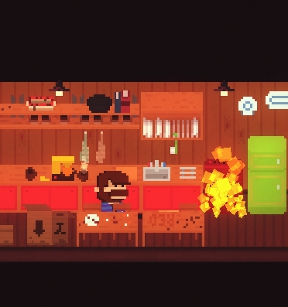 Though the game recommends a gamepad controller, it's perfectly playable with the keyboard. The [arrow] keys move you, while [Z] picks up and drops items, and [X] interacts with certain stationary things like lightswitches. If you're carrying something, hit [X] to use it, and [spacebar] will swap your control between the available characters. Hold the up [arrow] in front of a door to peek inside without entering. Don't know what to do? Well, that's sort of the point. In Lakeview Cabin, you're not given a direction or goal, so the whole point is to explore and make discoveries on your own. What happens when you leave the stove on? How do you get into that locked room? You'll need to experiment to figure it out on your own, and sometimes that can lead to deadly (and morbidly hilarious) results. There's no way to save your game, so you'll need to hit [ESC] to open a menu and restart the chapter if you want a clean slate or, um, less dead campers. Important items you pick up will be accompanied by a little piano trill, and you can view any notes you find by holding the [spacebar] and pressing the down [arrow]. 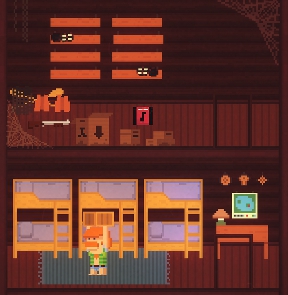 Because Lakeview Cabin III is so much bigger in terms of its location than the original browser version, it's a lot more complex, and the completely different plot and set pieces means you won't know what to do even if you played the first game. While you can inflict a fair amount of bloodthirsty mayhem on your poor characters, most of it is extremely tongue in cheek. They'll gape in horror at the demise of a friend, then go right back to wandering around aimlessly, and even losing a limb won't set them back too much. It's comedic in a very dark way, so if you're looking for a serious horror adventure, you'll need to keep looking for something that doesn't involve poop, fornication, drug and alcohol use, and the tragedy of tiny dogs and maniacs. Which isn't to say there aren't any startling moments... there are a surprising amount of very effective scary moments, often when you least expect them. Figuring out how all objects (and creatures) interact with one another takes some doing, and as you might expect, some of it is more intuitive than others. It's the same trial-and-error gameplay of the original as you encounter certain events that you'll need planning and intuition to get around and stay alive. 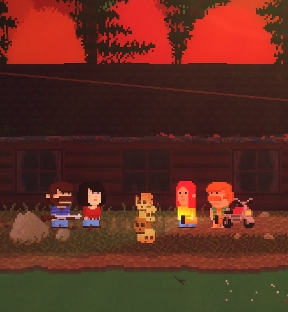 Like the original game, Lakeview Cabin III isn't actually that long once you figure out what to do, but part of the fun comes from experimenting and playing around with everything you can find, including different ways to "win". While some might find it too goofy and crass, others will embrace the gleeful weirdness of its sandbox gameplay and over-the-top violence and horror movie tropes. Time will tell what the rest of the planned episodes bring, though hopefully it's a different setting or two, and as of this writing there appears to be no planned release schedule for them, which may factor into your purchasing plans. As it stands, however, Lakeview Cabin Collection shows a ton of promise and keeps the macabre mayhem of the original intact while expanding on the variety in creative, horrifying ways. If you haven't played the original, there's no time like the present to discover why players were so taken with its unique take on horror adventure gameplay, and if you enjoy trying to outwit death and evil in a world where you can zipline naked and unclog toilets to solve puzzles, it's probably well worth checking out.
Play Lakeview Cabin (original browser version)

I loved the flash game : the initial surprise, and the original, yet disturbing, story telling.
The good thing is that this new version has even deeper interactions. The way music and sound effects is really amazing to create the atmosphere. However, I felt that the story is not as powerful as the original game. But to be honest I haven't finished it yet, so I might have new things to discover...
So really, it is a 5 star indie game for me.

A question : as anyone found what to do with skull, mask, and that heavy white and red stuff found in the first back pack ?

Double post, sorry. But hey, there are things to unlock after you won !

Weird, as someone who finally updated his Mac OS to the latest version, that itch.io has the Mac version of the game, but right now, Steam does not...

I think the Skull and the Mask are just red herrings. I still haven't found a use for them. As for the backpack near the start of the game? Pretty sure that's just a useless pair of y-fronts, but the sock seems a bit heavy. Use the Hammer, Axe or throw it one of the enemies and a key will fall out.

The only place you can use this key seems to be Cabin B. It's the door on the second floor and leads to the attic where you can find the Shotgun.

Soooo... you may as well visit Cabin B with the Axe as you can use that to smash down the door and also to smash up the wooden crate downstairs near the bunk beds. This will give you one of the two precious shotgun shells.