Lake House: Children of Silence is a casual adventure game from Alawar that involves a young couple, a mysterious death, a kidnapping, some really creepy goings-on, and, naturally, a lake house. It all begins in the cafe with an awkward wedding proposal met by a cold reaction from the would-have-been bride-to-be. When she explains that someone broke into your house and burned/scratched you out of the photo albums, you can understand why she's so freaked out. And you should be too, seeing as how there's a masked man who may or may not be Ann's long-dead brother following you around. At least the proposal will be a day to remember! 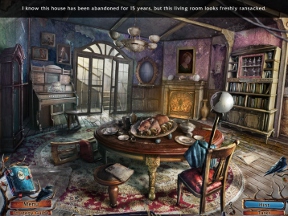 Working from a solid casual adventure layout, Lake House: Children of Silence builds multi-stage puzzles, mini-games, and a few light hidden object scenes around a lot of exploration and item hunting. Each area is tightly packed with things to examine, most of which are incomplete in some way and need a few extra pieces to make them functional. So, for example, you might encounter a clockwork train that needs to be wound, but they key is inside a box, that box is locked and requires a few pieces to complete which can be found by assembling another container, and so on. Fortunately you won't be carrying things around for too long, and Lake House never makes the solutions too obtuse for the logical mind.

Analysis: The real star of the Lake House show is the story and setting. Talk about creepy. The long-dead brother in an iron face mask is weird enough, but as soon as you start poking around the house and beyond, things get even weirder. The tale being told is very personal in nature, always rooted firmly in the main characters and their immediate family. You actually start to feel for them after a bit, despite a few clumsy set-ups and awkward lines of dialogue. 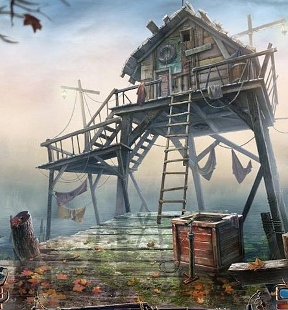 The artwork and imagery in the surrounding settings are pretty powerful, always bordering on the "Am I going insane?" look while staying gray and gloomy from the start. Lake House is definitely one of those games you'll get hooked on because of a powerful need to see what happens next, but the gameplay doesn't suffer from a lack of attention, either.

A complete package from any standpoint, Lake House: Children of Silence delivers a lot of good puzzles with a brilliantly realized story and setting. And with 14 chapters (not counting the bonus chapters in the collector's edition) to play through, you'll have a good three or four hours of enjoyment before the satisfying end.

A Collector's Edition is also available. It contains bonus chapters, a strategy guide, and more. Remember that Big Fish Game Club Members pay only $13.99 for Collector's Editions (or 2 club credits), and collector's editions count 3 card punches of 6 total needed for a free game.

I need help!!! Don't understand what the pattern for chapter nine of children of silence is for swapping the cats and pigeons.