Back in 2005, Takumi Naramura released a retro-styled exploration game called La-Mulana. Starring an archaeologist professor named Lemeza, it introduced modern players to an aesthetic not seen since the days of the MSX home computer, bringing with it all the convoluted puzzles, items, and high level of difficulty retro gamers love. Fast forward to 2012 for the worldwide release of a graphically enhanced update to La-Mulana that carefully reworks the look and feel of the old game to spruce it up for a new audience. Nigoro has done a fantastic job with the new La-Mulana, and the translation to the slightly-less-retro modern version is almost flawless! 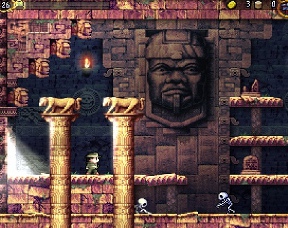 As with all platform games, Professor Lemeza has a small set of standard moves useful for getting around La-Mulana's world. You'll mainly be concerned with simple walking and jumping actions, not to mention Lemeza's trusty (but short) whip. Soon, you learn how to use computer programs for your laptop, a device that allows you to load helpful apps a few at a time. Watch your memory, though, as you can't have everything equipped at all times. You also gain access to items like the hand scanner, new weapons, weights for holding down pedestals, and other, more creative objects later in the game. Finding and gathering items is just one of your many pleasures in this lengthy and challenging game. But first, you have to find them!

La-Mulana is a special breed of exploration platformer (a.k.a. metroidvania) that deals in heavy-handed puzzles and unusual item conventions that most players take for granted. For example, in La-Mulana, you have to buy a special item before you can read signs. You are also denied health restoration drops, save points are far away from each other, enemies respawn as soon as you leave the current screen, and your weapons are very limited. You have to keep your wits about you and look before you leap, both figuratively and literally. There's no room for error in this dangerous world. 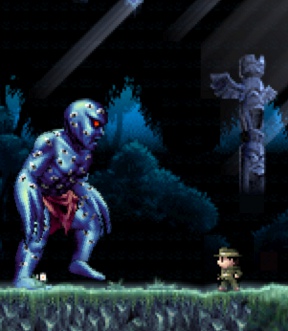 Analysis: We mentioned the release of the original La-Mulana game back on an early Weekend Download feature, and to be honest, we're still very much in love with the game. This updated version is a textbook example of how a "remake" should be handled. The core game isn't changed (apart from one or two minor alterations), and the presentation is bumped up only marginally, the equivalent of taking an Atari game and sprucing up the sound and visuals for a SNES release. The translation is off in some areas, but you probably won't notice unless you're the kind of person that looks for those things.

In some ways, La-Mulana feels like it throws too many elements into one bag and leaves you to sort out the mess. There's the platforming element, the crazy puzzles, the trial-by-death method for solving riddles, the multi-step process for locating, reading, decoding and understand glyphs on the wall... Then there's shops, equippable items, the computer and its inventory of programs, and NPCs to talk to. It's almost like a platform adventure game trying to be something of an RPG, but it stops well short of adopting too many peripheral gimmicks. Yes, La-Mulana is a lot to digest at first, but once you figure out what's going on in the game, you wouldn't want to give any of it back, especially not after you see how challenging these ruins can be. 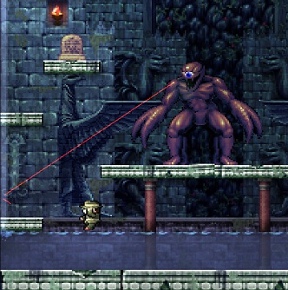 That brings us to another major point: La-Mulana's difficulty. This isn't a game for the faint at heart, but the danger of death doesn't come from tricky jumps or cheap kills. Instead, the challenge is rooted squarely in the game's stark simplicity and its refusal to spell everything out for you. Why send a warning message that pulling a lever might drop the conspicuously looming statue from overhead when it can just deal the damage and turn you into a more observant, cautious player? In effect, La-Mulana trains you to be a different sort of gamer, a much less cavalier and invincible warrior, but a much smarter explorer.

La-Mulana takes a bit of time to grow accustomed to, but once you do, it's one of the best exploration games around. Featuring over 20 hours of play time, this game has the ability to completely overtake your week, immersing you in a world of traps and treasures, hissing snakes and perfectly timed whip lashes.

Note: The 2012 update of La-Mulana is available through Playism, a Japanese download service that recently launched in English, and Good Old Games. The classic version of La-Mulana, without the remade visuals and music, is still available from AGTP. Simply download both the game and the patch and follow the installation instructions.

What a gem, this looks really great! Platforming+puzzles are always welcome...but I haven't played the original yet (downloading now). Do you recommend playing the remake if we missed out on the original?

Oh man! So happy! Really glad I randomly decided to check to see if you recommended any Android games. This is better. Way better. Yay!

@Brice Morrison Normally, I'm the type of gamer who loves the old school stuff above any newer version. In this case, though, I admit the new one might be just barely superior. If you haven't tried the game at all and don't mind parting with the cash, definitely go for the remake. The original is almost as good, though slightly less playable if you don't enjoy the sometimes awkward situations you'll find yourself in. Be ready for a punishing few hours. :-)

@themanmann You beat the mobile game reviews by a few hours, but I do have an Android game scheduled. If you want a sneak peek, then fill in the blanks below!

I've been waiting for this ever since it was announced for the WiiWare! Bought it on the day it launched, and so far I'm having a blast. Haven't played the original, though, as the lack of a save function and a way to heal would put me off every time I started the game. Things are more manageable this time around, so yeah, it's pretty fun!

Just beat this yesterday. Worth every penny. Thank you for informing me of this game's release. Thanks John!

I recently downloaded the game and I'm loving it. The only thing subtracting from this is the fact that whenever I (try) to save the game, the screen momentarily freezes and the game isn't saved at all. Is this a known bug? Mainly noting this because I know I can't win the game in one sitting.

@auroraB yes, it's a known issue; if you are using windows 7, you need to run the game as admin (right click on the game icon > run as admin).

By the way, since I'm here, I would like to remind that this game is also trying to reach Steam through Greenlight, so feel free to vote at
this link.