Welcome to indie multiplaying exploration-based adventure with KWAAN, currently playable in Steam's Early Access, a beautiful and persistent online world steeped in tribal myth, natural balance, and co-operative gameplay. KWAAN is a dynamic environment where keeping the spirit of the world vibrant and alive on a daily basis is of paramount importance, and players must collaborate to do this if they want the world on their server to continue. Nurturing the living pixel environment, contributing their unique artistic touch to the branches of the world tree, hand-crafting flowers, bringing the stars together into constellations, solving puzzles, crafting offerings, exploring the realm, and summoning animals like penguins, platypi and ducks are just some of the things that will keep KWAAN, the sentient tree and spirit of the world, healthy and alive. This is a harmonious and gentle world in which aesthetics, myth and imagination reign supreme. Blue glowing maana crystals glisten overhead, bright spirits of animals waft across the sky, and ice-block jellyfish appear briefly to form oceanic platforms for safe passage. Deftly bringing together a special blend of elements from genres like role-playing and adventure games, KWAAN is perhaps best regarded as a fantastic and mystic co-operative multiplayer platformer provided by David Calvo and Maxime Plantady. 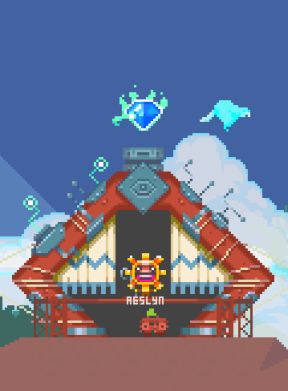 Kwaan is actually a Tlingit word that means 'village' or 'people of', and this is very appropriate for a game that succeeds in originality by exploring just what a co-operative world of players can even be. How KWAAN came about is almost as interesting as the game's world itself: It was originally commissioned by a cognitive science laboratory, the univac collective. From its Montreal-based publisher Ankama Canada to its Tlingit name to its cheery and co-operative utopian theme, everything about this game depicts the caring and compassionate idyllic world-view of our friends in Canadia (hence, 'Canadians'). Your character, a little Pikmin-looking thing called a Dwaal, also can't jump... at least, not without the help of trampolines and some very bouncy and unusually obliging sheep. Instead you're equipped with an Ook, which is a sort of viney grappling hook, and you can use it to grapple your way off of ceilings, tree branches, and the occasional ring-bearing flocks of birds. 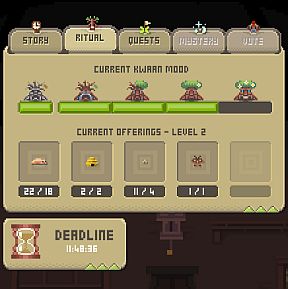 All movement is currently mouse-driven, and for all the emphasis on beauty, tranquility and exploration a lot of the platforming challenge definitely isn't second-rate. This may provide just the sort of action some players are seeking, while others are likely to find the handling a bit too rough in the game's Early Access stage and hope for a bit more polish there as KWAAN continues to be actively developed. In fact, so much of the game's difficulty had been amped up that as of this writing the developers had to do some major game rebalancing, making sure the spirit of caring and nurturing and harmony was retained... because amusingly, what they'd gotten on accident was tyrannous and overly-demanding Kwaan trees killing off whole worlds in an effort to slake their unquenchable thirst for player devotions. Consequently, KWAAN has just been restored to the fascinating, mellow exploratory game it was always intended to be, and we haven't seen the like of it since Tiny Speck's inspired, beloved and regrettably short-lived co-operative multiplayer Glitch, now being revived by fans as Eleven. Like Glitch, KWAAN provides a persistent and creative online world which expands as players learn skills and collaborate together to complete quests and open new areas. There's the Daily Ritual for example, which is like a sort of scavenger hunt to find certain items and offer them to the Kwaan tree to enhance its mood, or the group dances which can heal the tree each day if enough players can gather nearby and rock out together. Interestingly, combat doesn't have a place in this world. Between the village rituals and the very social in-game chat, players assist each other in learning about it instead - not only because as of this writing there isn't much in the way of documentation in the game itself or in online wikis yet, but also because it fosters a sense of community. Games of harmony, beauty and aesthetics like this bloom only rarely, and without the support of players can fade just as quickly. As of this writing the game is very modestly priced at just under $7.00USD, with eventual plans to release to Linux, Android and the iPhone as well, and is quite possibly the only way to immerse yourself for hours in a surreal realm of this kind of sheer wonder and beauty for $7 that's, you know, strictly legal. Do yourself a favor, and take a look. You'll be glad you did.

Ohhh, ahahaha! I really want to play this, it looks fun! Reminds me of Journey for exploration and cooperation! ~Not that I've actually played it, ehehe, for all its wonder in and of mystical themes..and a sense of interconnectedness. Very peaceful...and fun, loves of quests of different definition! Do you know of the possibility of this game being open-source?