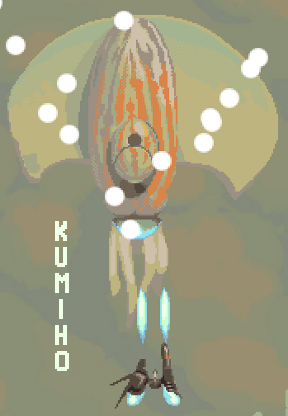 Created for the recent "Tiny World" themed Ludum Dare competition, Kumiho by Fedor Jutte and Christina Antoinette Neofotistou is an absolutely gorgeous little bullet hell shooter with an... unusual concept. According to the developers, a Goddess has transformed the world into a speck of dirt and all creatures into vicious machine entities and only your ship, originally a nine-tailed fox, is capable of stopping her. Use the [arrow] keys to steer, hold down [Z] to fire, and press and hold [X] to teleport a short distance in whatever direction you're hitting with the [arrow] keys. You'll want to use this Nightcrawler-esque BAMF! ability quite a bit, since enemies will use themselves and entire walls of projectiles to block you, and a single hit will kick you back to the last checkpoint you passed.

Kumiho is simple, but hard. The one-hit K-Os can wind up intensely frustrating later in the game as checkpoints come farther apart and some of the attack patterns require split-second mastery of your warping power to dodge. Fortunately, Kumiho is also exceedingly lovely, and has a rich, unique watercolour style that makes you wish the story and setting had been better expanded upon in the actual game so we could see more of it. If you're up to the challenge, it's a beautiful and fast-paced little shooter that we'd love to see developed further in the future.

Great game, and easier than some other bullet hell games, but i like it.

Nice short game, I wish it was a bit longuer to explore a bit more the warp concept.

That was excellent - attractive visuals, the teleporting system worked very well, and a good incline of difficulty. If only it had gone on for longer and continued to get harder.

Yet another example of why making a game ridiculously hard doesn't make it a good game. As vital as it is to surviving, especially near the end, teleportation should have been easier to control, perhaps by stopping time and showing the actual location teleporting in each direction would place the player. At the very least, the player character should have a couple of hits.

Going back after being hit should be preceded by some kind of indication of what happened. Did the ship explode? Did it rewind time? Did it just blink out of existence? Did it get knocked back? What?

Pretty good, but this game desperately needs a clearer hitbox. I died so many times on the last boss because I teleported too early because I thought the front of my ship would get hit, then promptly died because the tail of my ship landed on something when it looked like it was clear.