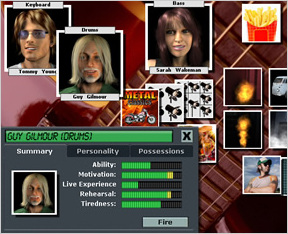 Positech Games (aka Cliff Harris) specialises in sim games such as Democracy and the previously-reviewed Kudos. His latest album, er, game allows you to indulge your dreams of rock stardom—start out as a struggling band with no publicity or gigs, develop your musical style, write songs and claw your way up to playing the Enormo-dome, making TV appearances and hiring bodyguards to protect you from the hordes of screaming fans.

In Kudos Rock Legend, you start out on your own, and must audition musicians. Each musician has certain personality attributes, such as being articulate (makes you good at interviews), ambitious (makes you less likely to become tired) or destructive (makes you likely to break stuff, costing the band money). You must hire at least three other band members before you can write songs. From there, you need to have at least 6 songs before you can get gigs, and 10 before you can record a CD. Buying CDs and going to gigs will inspire you, making your songs better. You can also practice your musicianship by copying a sequence of notes on your keyboard—this will make your musicians more proficient, and likely to get a record deal. Once you've made enough money, you can also stock up on merchandise, upgrade your equipment and hire staff. As you build up your live experience, recordings and publicity, you'll get better options, such as interviews with newspapers and radio, offers of sponsorship and possibly a record deal!

Every once in a while you'll need to take a day off, or your musicians will get stressed out and quit the band. Fortunately, going to the bar during your day off allows you to both reduce stress and increase hype as you chat about your band and how awesome you are.

Analysis: This is a highly enjoyable sim, especially if you're a frustrated rock star like me. There are lots of fun little references for rock fans like the names of the musicians, such as Lars Halford. (Even Cliff's own name sounds like an amalgam of Cliff Burton and Steve Harris!) Spinal Tap fans will appreciate the ability to buy a styrofoam Stonehenge set. Your 'to do' list has classic rock quotes at the bottom of the page, such as David Lee Roth's "I used to have a drug problem. Now I make enough money." 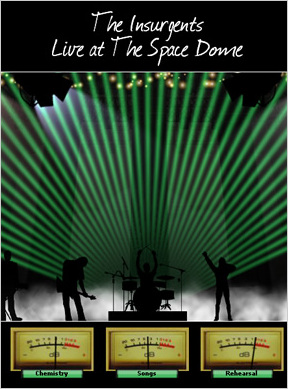 I only have a couple of little quibbles. Firstly, when you open a musician's window to view their equipment and levels of motivation, tiredness etc, there is a button marked "Fire" if you want to get rid of them. Unfortunately, it's located at the bottom right where you would expect an "OK" button to be. I accidentally fired a couple of perfectly good musicians because of this.

A more serious quibble is that there's no high score table. There's no way to compare if I made more money with my sensitive folk-blues outfit or my operatic cock-rockers, or if my brave, non-selling-out no-record-deal DIY punkers were able to get close to the sales of my big mainstream AOR outfit. The game would be much more replayable with this feature.

Other than that, I thoroughly enjoyed this game and highly recommend it. Plus, if you're a rock fan, why don't you check out the JayIsGames last.fm group?

Kudos Rock Legend is available to download from these affiliates:

It was pretty fun for the first couple of years, but my band members just kept getting more and more demanding (customized guitar picks?) and less and less easy to motivate. Which is how it is in real life, I guess, but jeez. :/

This game was a lot of fun, but the fun waned just about as my hour demo time ran out. It's certainly not worth paying for, as far as I'm concerned. It's just too casual, and there isn't much replay value. There are also a bunch of typos, and the music is really spotty. There's also no auditory que for the musical training, oddly enough, which makes the very fast game of Simon it is really difficult after a short time. It has a lot of promise, but just didn't cut it for me. Of course, everybody should give it a try, at least! (And don't forget about your rehersal button until your star saxophone player leaves you because you never practice like what happened to me.)

Raitoo, members are motivated by rehearsal and by successful gigs. Try making sure their "rehearsal" level in the right-hand menu is in yellow, then playing a gig with a few t-shirts or posters to sell. As they get more success, they get interviews with radio and TV, which motivates them even more. As for being demanding - well, you can indulge them or not, it's up to you. I think this may be Cliff's comment on the personalities of rock stars :)

For tips on how to get the most out of gameplay, visit the Positech Rock Legend forums at http://positech.co.uk/newforum/ - they have advice on how to mod your game as well, which can help people like Slade who hate Simon games. (You could mod the game so that every tune was "1,1,1,1,1,1", although personally I would think that was teh suck.)

cool game! I pay more attention to the attributes of the band members anyhow and its got them rolling in dollars ^.^ try it!