KRUNCH from LeGrudge & Rugged is going to make you growl in frustration. The good kind of frustration. The kind that VVVVVV, Super Meat Boy, and the Karoshi series bestows upon you. The kind that, even after dying in the same short level two or three dozen times, you still come back for more, hoping to slip through that tiny gap between a sawblade and a crushing pillar of death just so you can fly forward and die again. And you'll continue to play until you've clawed your way through over 100 levels of painful, challenging, gorgeous arcade fun. 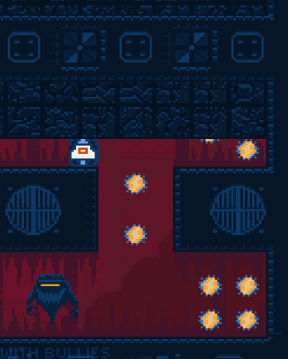 You take control of a flying Beholder-like mechanation trying to escape the rapidly razing factory you were housed in. The controls keep things quite simple: [arrow] keys for movement, and hold [z] for a speed boost. The thing is, you're constantly losing health in KRUNCH, even when you're not doing anything but sweating in a fevered panic. Dashing consumes extra health, so you've got to collect glowing energy coins in order to stay alive. This leads to a lot of frantic moments with the walls closing in, health running out, and dangerous things mere pixels away from your vulnerable self. Whew.

The goal of each level is to make it to the exit duct alive. Levels only last for 20 or 30 seconds but are absolutely packed with spikes, blades, crushing walls/ceiling/floors, bully-like enemies, and other insta-death ouchies. That adds up to a whole lot of mad dashing and precision arrow key tapping. You don't have to gather every energy coin you come across, but KRUNCH keeps track of how many you gather along with how long you play and how many times you die, displaying everything on an online leaderboard. Want a spot up there? Get ready to work for it. 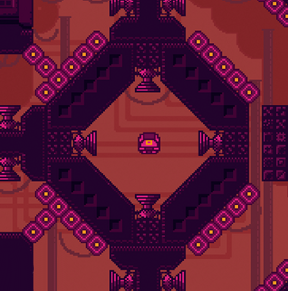 Analysis: Retro gaming is the cool place to be, and KRUNCH doesn't try to hide its inspirations. Both the artwork and soundtrack have a distinct NES-era flavor to them, though the artists responsible for each clearly went above and beyond the limits of the classic system. That's a good thing, though, as KRUNCH looks, sounds, and plays like a dream. Which is why you can't stay mad at it no matter how many times you die.

The only real drawback to KRUNCH is that because of its high level of difficulty, it won't be the sort of game everyone can enjoy at all times. Sometimes you want to kick back and drink a cup of tea. With KRUNCH, tea drinks you. Or something like that. The point is, the game is exciting and requires repeated attempts at the same small sections. Failure is part of the experience, so if you're the type who gives up easily, you'll probably be better off just banging your head against the keyboard and getting it over with.

For a good time, call KRUNCH. It's got loads of content and provides plenty of incentive to go back and replay levels so you can get a decent score. It'll only take about 20 seconds each run through (or, like, three seconds when you fail), so what's there to lose? Other than your calm demeanor, of course.