As of September 2014, Kraven Manor is no longer free to download and is only available as a purchase from Steam. This review has been updated to reflect that.]

A dark mysterious house on a stormy night... what could possibly go wrong? Originally released as a freeware beta and now available on Steam, Demon Wagon Studios' harrowing indie horror adventure has you stumbling into the cold comfort of Kraven Manor one night. You may be out of the rain, but you've run straight into the dark heart of one man's obsession, and you'll find out that the whole house is against you... unless you can manage to turn it against itself. Move with [WASD], holding left [shift] to sprint, and use the mouse to look around or interact. Hitting [F] toggles your flashlight on and off. The key point to exploring is to find more scale models of rooms hidden throughout the manor and bring them to the entryway. There, you find out that this place has one seriously unique floor plan... you can place and rearrange the places any way you like (as long as they have a valid connecting doorway to the main areas) and doing so literally changes the layout of the house around you, opening the way to new areas and changing pathways so you can reach previously inaccessible places. But keep your eyes peeled as you explore. You're not alone, and something doesn't appreciate you prying into the house's past and its secrets, and the more you know, the harder it's going to try to stop you. If prompted, hit the onscreen keys whenever assaulted, because in addition to light, the antagonistic force in the house is weak against button mashing. The game works on a checkpoint system, so should you meet a gruesome end, you'll just start over again at the last point you passed. 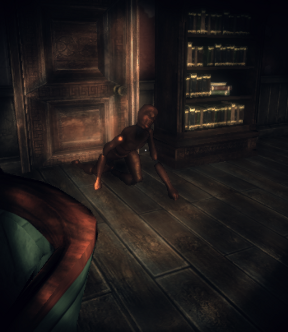 Analysis: With its superb use of lighting and ambient sound, Kraven Manor possesses some of the best atmosphere around. Although the premise may have a bit of the whiff of the Winchester Mansion around it, the actual story, revealed in bits and pieces through notes and clippings, almost feels like an afterthought. I'd say explaining away your creepy antagonist ruins the fear, but, well, I'd be lying because the "chase" sequences are used with devastating effectiveness. The game is fantastic about keeping you on your toes and making your spine crawl, and you'll dread every flicker of your flashlight. While there are quite a few jump scares, a lot of what's frightening is more the sense of anticipation that mercilessly ramps up the more you explore. I found myself channelling Lana Kane more and more every time I found a trail of blood where one previously hadn't been, or heard a sound behind me... Nnnnnnoooooooooope. It makes up for the journal entries being as bland and dry as a dust devil's gasp in the desert, when any legitimate game protagonist's scrawl would consist entirely of, "Oh geez, oh geez, oh geez, oh my goodn-WHAT WAS WHAT?!... oh geez, oh geez..."

Though shuffling the house's layout around is a clever touch, it felt like a gimmick until the second time you were given access to the library. Which is, incidentally, right around the time it feels like the game actually gains some teeth beyond simple frights and storytelling. The antagonist's appearances become a lot more menacing and tricky, incorporating puzzles and darkness into a way that forces you to think on your feet. The enemy's mechanic feels somewhat like SCP - Containment Breach's SCP-173, but more sinister and unpredictable. Trying to keep an eye on it when you think it should be on the other side of the room, only to round a shelf and find it right in front of you with arms outstretched in stillness is the sort of thing that makes you jump out of your skin. The air of menace the game manages to produce is really remarkable.

As of September 2014, Kraven Manor saw a full release into a paid game available exclusively through Steam. Players already familiar with the freeware release might not find anything substantially different here, with the focus on polish and bug squashing. The most notable addition is Nightmare Mode, which gives your flashlight a limited battery, but if you were expecting or hoping for new content and an overall bigger game, you might be disappointed since Kraven Manor is still likely only going to take most players an hour or so to finish. As a result, the $9.99USD price tag, which can be a lot of money for some players who game on a budget, might be a bit much factoring in the lack of replay value. Kraven Manor remains, however, a gorgeous, creative game that's filled with moments of subtle horror and brilliantly executed jump scares, and one can only hope we see even more from its talented team somewhere down the road.

Windows:
Get the full version (Steam))

(counting the five rows of bookcases from the door out, 1-5)

Going to the White Room

rightmost (green portrait was the only true one)

Good for a short few minutes of gameplay.

Would've been better if the challenge had been upped by either adding more stages with increasingly difficult to create shapes, or more stars to make it more confusing.

(counting the five rows of bookcases from the door out, 1-5)

Going to the White Room

rightmost (green portrait was the only true one)

1,359 Views
0 Comments
chrpa— Jayisgames needs your help to continue providing quality content. Click for details Welcome to Mobile Monday! Big devs didn't miss an opportunity to make a Halloween themed game and so we have several games in purple and orange design...  ...