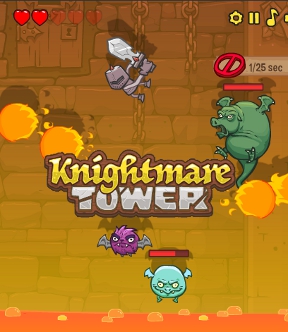 JuicyBeast wants you to save some princesses at the cost of slaying your productivity in their addictive new arcade launch game, Knightmare Tower. Using the [arrow] keys or the mouse to move and attack, launch your knight up a tower packed with enemies to slice-and-dice, earning gold for upgrades to help you climb higher and rescue princesses along the way. Slicing up enemies will help keep you bouncing upwards, but take three hits or fall into the lava when it catches up with you and you'll have to launch again. Complete "quests" by meeting certain achievement criteria and you'll get even more gold, which is probably a good thing since that rickety rocket-powered barrel isn't exactly the most glorious of "trusty steeds" we've ever seen.

It's easy to make a simple arcade game, but making that simple arcade game addictive and fun is a lot harder. With its adorable, cartoony monster giblets and "just one more launch" style gameplay, however, Knightmare Tower is hard to put down. Though it's definitely heavy on grinding and repetition, the grin-inducing style and fast-paced, easy to master gameplay make it a winner for players looking for something snappy and casual to fill some time. If you have the reflexes for the chaotic action and aren't afraid of a little grinding, especially if achievement-based incentives fill you with glee, Knightmare Tower is weird in a wonderful way and will eat up all the time you give it. So leap aside your barrel (watch for splinters!) and keep on shootin' for that big ol' princess bonanza in the sky.

I'm a sucker for launch games and I really like this one. It requires more grinding than I'd like, and the "boss" was too drawn-out, but otherwise this is a good game to spend some time on.

This would make a decent IPhone game.

I like the game, but even with the better graphics off I still freeze up from time to time. Really hate it when the boss comes. Otherwise good game.

I'm a bit annoyed that you can't get to the boss on the same run as you finish the last quest. http://i273.photobucket.com/albums/jj206/Maat_Mons/grr.jpg

If anyone is curious about the last potion effect but doesn't want to waste their time collecting the money for it, it:

turns you into Burrito Bison

Personally, I thought it was clever that

while the first nine princesses looked like standard pretty girls, the tenth looked more like one of the monsters you were rescuing her from.

It would be nice if you didn't have to start at the bottom of the tower once you've reached the boss level.

After enough upgrades, the normal game isn't so long. There's an achievement for finishing it (including boss) in 3.5 minutes which I got without much effort after just about maxing out everything. I was happy to see 30 more quests in survival mode!

I agree with JustMe -- once you've reached the boss level and then fail, it's discouraging to have to fight your way back up the tower only to be defeated by the boss again. Just return us to the boss level, please!

Here's a big hint on the boss level:

Heres a good way to get free coins early in the game.
Go to the 'free gold' page, and click all the links. It will give you the coins automatically, so even if you dont have a facebook or twitter, you can easily get a load of free coins without needing to sign up.