We all know the story: Princess gets captured, princess needs saving, knight comes rescuing. But the hero of Knight Runner, a quick paced action runner from Noname Lab, is one of the few that will run all the way there. Use the [arrows] to move and jump, or play the game solely with your mouse, or a combination of mouse and keyboard. Grab coins and destroy enemies by bouncing on their heads, aiming for combos by staying aloft. Stamina, the red bar, goes down as you run, but you gain more for each enemy you kill. You lose a life, indicated by hearts, for hitting obstacles, from taking damage, and your run ends when either runs out. Visit the shop between runs as it offers upgrades, and allows you to purchase and improve power-ups. If you need more gold, complete "quests" during levels to get achievements and a cash reward. 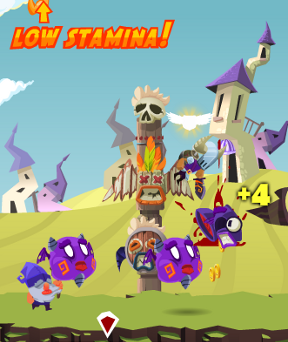 Knight Runner plays almost as much like a launch game as it does a jump and run game, which isn't a bad thing. It brings back fond memories of Burrito Bison, what with the gates to break through and the enemies to squish. While the instructions are a little sparse, it's an easy game to pick up, but a hard one to stop playing. Some of the achievement quests seem to be out of order (harder ones come before easier ones), which makes it all the more disappointing that after you save the princess the game resets so you can't continue on to complete all of them. Hopefully this issue will be addressed in the mobile version, set to come to your favorite iOS device in the near future. In the mean time Knight Runner is still a great game that will keep you glued to your screen for quite awhile. I mean, if tradition holds, that princess isn't going to save herself.

Wow. The stamina bar drops RAPIDLY after the second door. You'd think it sprung a leak.

Do you have the Old Skull or Ragged Shoe upgrades? I was able to get a lot more distance past that point once I invested in those skills.

I really wanted to like this game more that I did. I found that it had a few flaws, though, that were glaring enough to the gameplay to keep it from getting 4 or 5 mushrooms.

After grinding through all the skill upgrades and assuming that I will be able to smash the last door with a pretty good run, it turns out that you are going to need a good bit of luck too.

The game engine is set up so that each successive level drains stamina faster and monsters are harder to kill, making getting to/ through the next door a challenge. So, once you have enough upgrades, getting through door 1 is a breeze, then you upgrade some more and door 2 is a breeze, etc.

Well, I played fully upgraded through the (what I assume to be) last level and could not keep my stamina above that last notch, no matter what. The monsters are really infrequent, and it seems like the power ups disappear too. I tried about 10 times and finally gave up.

The game doesn't tell you that you actually have to buy the power ups to make them appear. So I purchased two levels of invulnerability, wondering where the rocket/ meteor/ etc were before it clicked. The help messages when you mouse over the upgrade imply that it improves an existing upgrade, not that you have to purchase it.

Not sure if anyone else experienced this, but there were far too many times I "stomped" down on a baddie only to have it not register and break a combo. The game seemed really hit and miss in this respect; the bobblies (sp?) had big hit boxes, but the wizards did not, almost as though they used the little purple or green guy hit boxes for them.

Not sure if I needed to use spoiler tags for this review, but better safe... ?

Why is magnet on the power-ups menu when it's a continuous benefit?

There seems to be brief pauses every time the user moves around or stomps on something, which make this borderline unplayable. It would be interesting if it played properly, but I can't give it more than 2/5 while it's this sloppy.

I am inclined to agree with Neo here.

Plus did anybody get any update on the Use Beserker achievment?

No, it always stayed at 0 for me too. I'm not sure if it would have given the achievement despite not showing the progress toward it. I finished the game before I could find out.

Also, really wanted to like it, but just didn't seem to work very well. Also, is it just me, or is the background music "My Heart Will Go On," from the Kevin Costner Robin Hood movie?

Agree with Neo's 3/5 rating.
I managed to make it through the whole game, but hit similar problems. Another comment: I found the 15 X combo achievement almost impossible to get - the problem here being there were too many things to break a combo run, the most frustrating of which was running out of things to jump on. Having slightly more time between 'hits' to score a combo would have made this challenge possible but still difficult. The best strategy seemed to be using the beserker power-up and running through the little dudes, but even then you have to cross your fingers that you don't run out of enemies or hit a door. I got up to a 14 X combo with a beserker power-up (with a lot of luck), so think it would be possible to get this achievement - just wasn't entertained enough to bother continuing to try.

Summary: good concept, not a bad game as such, but lacking the perfect balance of rewards/difficulty that you can find in other games of this ilk.