Silly, sassy, saucy, and unexpectedly smart, Kitty Powers' Matchmaker from Magic Notion is the dating and matchmaking simulation you didn't know you needed for your iOS or Android device. You've just been set up with your very own dating agency by drag queen extraordinaire Kitty Powers herself, and with her guidance, you'll grow and expand your business and clientele by matching people and leading them towards their happily ever afters... hopefully. Based on their interests, personality, and more, you'll comb through your black book to try and find a suitable match, and then use an earpiece to help nudge them along on their dates, both by selecting the proper responses and choosing whether to lie when asked about something, and by playing a variety of minigames. But more than just knowing how to match people with similar interests, Kitty Powers' Matchmaker is about your own observation and deduction. If your client's date pops off to the bathroom and returns asking how they like the change, you better be able to spot exactly what's different about them. You'll need to be able to remember details about the potential match's profile to properly steer the conversation. You'll need to know how to order from them based on what they say they want to eat, and also be able to pick it out of a lineup of different dishes whose names you might not recognise. Heck, if your client goes on a second date with them, not only will you need to keep track of what they've already discussed so they don't get bored, you'll also need to know when to ask to see them again, or even if you should take the next step. Throw in tons of unlockable content, no in-app purchases, unexpected depth, same-sex relationships, fantastic writing and a great sense of humour, and Kitty Powers' Matchmaker is head and high heels above the rest. Also coming soon to your computer via Steam! 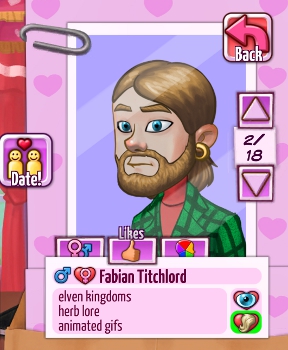 The game is basically split into two portions... listening to what your client wants and finding someone who looks like a good match to go on a date, and the date itself, which you watch via hidden cameras and help your client by guiding them with an ear piece. Figuring out if two people are a good match for one another isn't always easy because the huge variety of traits and interests in the game means it's rarely an obvious matter of hooking someone up with somebody who has their favourite hair colour, or shares the exact same interest in "giant anime robots". Even if two people don't have the exact same interests, you can still make a good match by thinking about whether, say, ghost hunting might actually work with an interest in old graveyards. Attitudes towards things like modern conveniences and, um, "spiciness" also play a role, as does (potentially) a Zodiac sign and their jobs. The better you get at your job, the more affluent clients you can attract, who are harder to impress than others. You'll also unlock new locations for your dates to take place at, upgrades like a salon to give your clients a makeover to better appeal to a match, and much more. Different character types have different tastes in everything from makeup to hairstyles, and more often than not, you'll need to figure out for yourself what's appealing to someone. 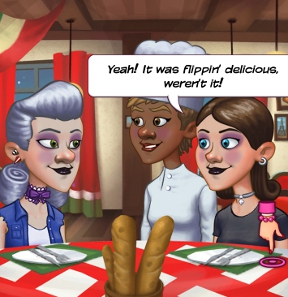 When you've decided to send your two theoretical lovebirds off on a date, things get even more complicated. As the date progresses, you'll need to pull the Love Handle, which spins like a slot machine and randomly presents you with different topics of discussion to choose from. If your client and their date share similar opinions about it, you're on the right track, but a strong difference in opinion will add one strike to the three you can get before the date ends on a sour note. There are a lot of random events that can happen, from calculating the proper tip to leave, picking out the right sequence of pretentious descriptions to sound like a "foodie", remembering what your server looks like from a lineup, and even what the weather was like when you arrived if you choose to talk about it... though few dates consider this lively conversation. As mentioned, your powers of observation and deduction are key in a big, big way. You won't get to refer to the details about your date while you're out, so if you bring up interests, you'd better be able to remember which things from the list you're presented your match was actually into. Other things, like remembering what your waiter looks like when it comes time to call for a bill, also mean you'll need to be paying attention to everything happening around you even if the game doesn't tell you to do so. It makes for a much smarter and more challenging experience, and more satisfying too. 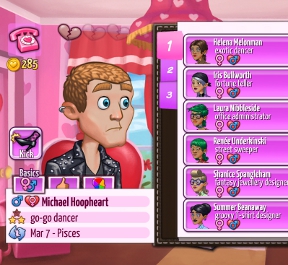 At the end of a date, you'll need to decide whether to ask to go steady, try on another date with the same person, or call it off. Filling up a relationship meter with hearts will make a successful match, while three bad dates will make your client storm out. The success of a date has a big impact on your business, as you might expect. Doing well increases your reputation, leveling you up to gain access to more unlockables and other clients and advertising locations to attract different people, and doing poorly, well, does the opposite. You'll even get letters from your dates later on that will update you on their relationship... maybe those lies you urged them to tell came back to bite them, or maybe they found wedded bliss. Whatever the case, that will also impact your reputation based on the grade you receive for a match's final result. The cash you earn from sending people on dates is spent on more than just upgrades... you'll open new locations for dates to go to, sure, but you can also use it during dates to get hints for the right choices, or even to change the available conversation topics. 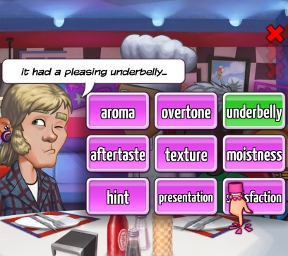 Throw in the fact that the game profiles you when you first start and gives you the option to send your (anonymous) avatar out to go on dates in other people's games, and will even update you as to how it goes for them, and you have a game that is far, far more complex and intelligent than you'd ever expect. You're constantly kept on your toes by needing to pay attention to detail, and something new is always unlocking to keep things fresh. The wide variety of random events/minigames on dates is impressive, as is the high quality polish to everything from the visuals to the soundtrack, and, yes, even the excitable ahhs and grunts people make to communicate. It also doesn't hurt that Kitty Powers' Matchmaker is extremely funny and well-written, mixing cheek and sass with a good hearted tease at just about everyone, without ever becoming mean-spirited. It's a celebration of weirdness as something that makes people wonderful and fun, rather than a mockery of it. Having a client accidentally pass gas might not always be a bad thing... one date cheerfully informed me that her "exhaust emissions were equally offensive", which lead to her bonding with my client. Sprinkle on just the right amount of pop culture references, including some to indie games ("Thomas WAS Alone until he came to see me!" Kitty boasts at one point.)

Kitty Powers' Matchmaker is the type of game we could use more of... clever, thoughtful, inclusive, and, of course, fun. It's far more progressive than many games on the market, which is only bolstered by its cheery, winning personality. Kitty Powers' Matchmaker is, simply put, great, and an absolute steal and its current price of $2.99USD. You'll be playing for a long time, honing your perceptive skills and matching edgy nerds, vintage jocks, practical hippies and more from a procedurally generated list of extremely quirky characters. You can even wind up matching the avatars of other players! If you have any interest whatsoever in smart, funny sims, Kitty Powers' Matchmaker is a no brainer and should be in your gaming library right this second.

Thanks for the great review! I love the screenshots :-)

I just wanted to point out that there are bisexual characters in the game, but they are relatively uncommon (since in game mechanic terms they give you an advantage!).

Anybody else having trouble purchasing this game?

we are having a temporary issue which will be resolved in the next few days. The game will be purchasable on the Google Play store again later next week. The iOS store remains unaffected.

Thanks for your patience!

Normal service on the Google Play store has been resumed. Thanks for your patience everyone :-)

It worked! Can't wait to play it -downloading now.

Can't wait for this to come out on Steam- my phone has like zero memory!

I'm really loving this game -- I've been playing it for 3 days now, not minding the bad weather we've been having at all!

I'd have thought, given the game mechanics (find a date, go on a date, become a couple, repeat), that it would get dull after a while, but there are so many options and combinations, it really doesn't feel repetitive, even after

getting to the highest level (and

getting to start again, with all the upgrades -- great feature!!).

The graphics and gameplay feel really professional, and there's so much replay value, I think the price is totally worth it.