It's good to be the king. Issuing decrees, sitting on a throne, launching yourself on a dynamite-powered battering ram through miles of inclement terrain and worrisome foes so that you might bring swift justice to those who oppose you. You know, king stuff. That's the hook behind Smokoko's new game, King's Rush, which brings a regal air to the launch game formula. You use dynamite to blast your royal ram downhill, using [spacebar] to jump and [X] to fire cannonballs at obstacles and enemies. Each little impact saps some tiny amount of health, so keep your wits about you. Snow mounds and yetis won't do much damage on their own, but it adds up over time. The coins you collect in the field can be used to upgrade your battering ram in a variety of ways, increasing stats like ramming speed, armor and reload times. There are also gadgets you can buy that will even the odds in the field, and a few magic gems that are deployed at periodic intervals to give you the occasional boost. 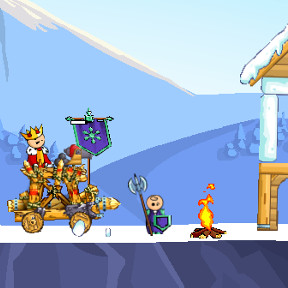 If there's one thing King's Rush has in spades, it's enthusiasm. The soundtrack, for instance, is downright rousing. Maybe too much so. Keep a finger on the volume control when this game loads. In the chaotic world of the launch game, where bits of wood and snow fly at you from every which way, graphics are key. King's Rush has a pleasing cartoony vibe, although it may occasionally lag on the higher graphical settings. The lack of ability to move forward or back is disappointing. Strategy mostly revolves around timing your shots and jumps to clear the path for optimum speed, but there isn't much strategy to it all. In this respect it has more in common, perhaps, with an idle game. When you're not fighting one of the more reflex-intensive parts of your journey, the fun comes from watching your upgraded king wreak havoc on his own. Causing chaos and getting paid for it is always fun, and that's where King's Rush shines. It's good to be the king.

Thanks a lot! We put in our best in creating this game. It's pleasant to read such review.

Engaging and fun. No problems in Frostland, but am having some lag issues in the 'Grassland' level and lowering the graphic quality doesn't help.

Gets all the way to the ocean, even has a floaty on and doesn't even go in the water

Shouldn't have taken 60 days to complete.

Buy and upgrade the gadgets and boosters; they stay upgraded, at least from what I can tell.