A terrible dragon had just finished ravaging the northern lands chomping all the livestock in its path. However, through the cunning of the king, the monster has finally met its end. Or so we all thought. Now, it seems that old enemies have returned, and giant chomping skeletons will soon the least of the kingdom's concerns. It's the king they are after, though, and he's got towers full of unstable platforms to clomp down on the heads of anything that wants to munch him. But as he climbs, the complicated truth will soon be revealed. King's Ascent is a vertical-scrolling action-platform game by Aqualuft that'll have both kings and vagabonds playing their very best. 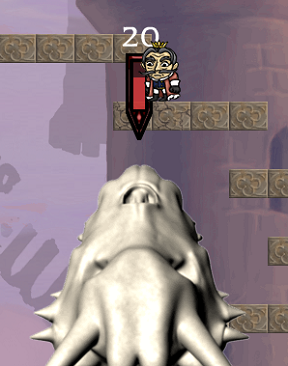 Use the [WASD] or [arrow] keys to move, and jump using the up [arrow] or [spacebar], holding it to jump even higher. A beast is chasing you, and will kill you if it catches up. Some platforms will fall once you've stepped on them, but you can use this to your advantage: if they fall on the pursuing beast, they'll knock off a bit of his HP. Destroy the beast's life bar, and you'll move on to the next floor, until you reach the top of the tower for a boss fight. At this point, you'll be transported to another tower with another beast... and it seems like the monarch has made quite a few enemies in his time on the throne.

King's Ascent proves to be an enjoyable iteration of the vertical-climber formula, but with a smart deconstructive edge. It's as if the authors of the game started development by questioning aspects of the gameplay that hadn't really been explored narratively: Why is this character jumping up this tower? What is chasing him? What motives does this creature have for wanting to catch him? What exactly is the plan once they both reach the top? As a result, there's a surprisingly strong sense of plotting in King's Ascent. It goes hand in hand with the strategic puzzle elements included: players will need to plan their jumping in each level if they hope to survive, though restarting each section is a snap. Kudos also has to be given to the unique stained-glass-like graphics style, though one wishes it was also applied to some of the bosses. The CGI modelling is a little jarring to say the least. That said, King's Ascent offers a breath of fun and challenging action to its familiar game play, and its storytelling is sure to separate it from the climbing clones. And hey, the song that plays over the credits is pretty catchy too!

I really do like this game, but the increasing choppiness of the play/graphics prevents me from getting too far as does the password that only works for the first level. Even though it appears to only be 6 levels, it would be nice to save progress so that the cache doesn't get overloaded.

Correction: the passwords DO work, but for the levels, not the parts of the levels. Still, if you have the choppiness, you'll just have to power through it. :\

Good game, but I dislike that you can't really read the conversation the characters because you are running from the monster.

4 castles. The third one is annoying with the spears, but I think the tyrant is harder do to his hands.

What's the underlying message/lesson of this game?

I understand from the first three levels how the King is wrong, but how is he worse than a tyrant?

DONT any of these games have a music mute or at least be able to turn it down. This is not the only one that blares. I want to be able to play the game and watch a movie or a video. SO I DONT WANT THE LOUD MUSIC. I will dump the game over the noise. Thanks

I'm guessing that they don't want you to multitask but give your full attention to the game. You can always mute your 'puter and listen to the radio in the background. ;)

I am not a fan of the narrative. Not the fact that it exists, or that it is played over the action, but the connotations.

If there is to be a "kingdom," and a "king," and the people are to cede over the authority to him, then there will be consequences to it. Any person in a position of authority will seem like a tyrant to some. No matter how many you help, there will be a few who will hate you.

The political undercurrent of the narrative suggests that all people in positions of power deserve to be disposed of, even if they tried to do the right thing. Of course, it is never so simple. Just watch/read Game of Thrones to know that. And yet when they have disposed of the king, they turn around and ask who will be next? IMHO, they deserve whatever calamity the next king will bring to them, rather than working through their difficulties with the current king.

I suppose what gets to me about this narrative is that it makes an attempt to take the deeper route, but at more than a glance the whole thing falls apart. Ah well.

No one person can be aware of every factor of every situation every time, and thus cannot always make perfect decisions - even in situations where a path that causes no suffering to anyone even exists at all. A responsible ruler may aim to eliminate suffering, but at best can only partially reduce suffering.

Also, between the way the King is drawn/animated, the use of a "twist" on platformer mechanics, and the message that

the protagonist is the antagonist from another perspective

...reminds me of something.