One foggy dark night, trolls are seen in the land. As king, it is your duty to protect your citizens by paying them to fight for you. In Kingdom, a defense game by Noio with music by Pez, the goal is to survive the troll attacks each night for ten nights. Move your horse with the left and right [arrow] keys, and press the down [arrow] to perform any actions. If you need to pause, just click outside the playing area. 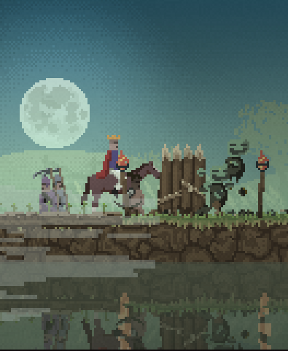 By day you must venture forth to recruit help. Once the peasants you find collect the coins you throw to them, they'll wander into to town to help the cause. Depending on what you have purchased, they'll either pick up bows or scythes. Bows are used to shoot rabbits and trolls. Scythes are used to farm and build walls. Of course you've got to have cash to build a kingdom, so pick up the money that drops when your archers kill rabbits. You'll also get coins when your farmers harvest a field. You need to balance Investing your coins in walls and towers for defense and making sure you have enough of bowmen to fend off the enemy. By night beware! Trolls attack! It costs you if the monsters break through your defenses. They will disarm your men and break down your walls, costing you precious coins to rebuild. If they get to the King, it's game over. It can be a bit frustrating as you really have no control over where your archers or builders are stationed. While this may add a little too much randomness for the true strategist, Kingdom still manages to draw you in with its simple gameplay and beautiful atmosphere.

The game does not end on the tenth night, but it certainly is a challenge to survive that long!

Oh my gosh, the jump cut just for tutorial's sake is so very annoying! If I have limited coin, and I'm tapping down, and the screen jumps leagues away, there go my coins. Unbelievable. Stop trying to be cute when it interferes with gameplay.

Fun little game, feels more like a demo than a full thing though to me. Things like most of the bowmen not glued to the castle going to the left wall and staying there, plus bowmen and farmers needlessly running outside the walls, if you have expanded, are rather annoying. Equally parts of it just feel pointless/game breaking eg the giant trolls that are near impossible to stop smashing even a top end wall to nothing making it near impossible to even utilise more than 1 or 2 expansions and the castle seeming to do nothing productive other than pinning your bowmen in place where they aren't needed. Plus it seemed a bit awkward that even 2-3 days in you need the top end wall for it to not be smashed to smithereens and forcing you to start over, whilst unbuilt upgrades to the wall effectively remove it and depending what the ai decides to do it can take all day for builders to even reach an attempted build, let alone get it that high leaving them perfectly situated far outside the 'safe' zone to inevitably be gotten by the trolls.

Felt like it would really shine if those big trolls were just a little bit more manageable, the ai did more to have people stay inside the kingdom at night and bowmen to divide more evenly to station near the outer walls. Plus a few other small niggles being rounded off to make a slightly fuller game experience.

A King that doesn't own a sword must be a bit of a fifth wheel.

I like the game, but I feel like it'd be a more immersive strategy game if you were allowed to navigate the archers and constructors to specific points.

I really am unable to to do anything to survive the third night. am i missing something?
the builders go to the walls outside (which i told them to build and are getting killed, so they are not a good investment...

I have 6 archers in my castle and no more neutral men seem to spawn for hire so I have no way to build walls. Annoying.

Invest in the castle:

It makes the archers who inhabit them immobile, but also invulnerable. It's worth the investment because trolls who climb your walls will steal your bows otherwise, leaving you defenseless. Sufficient castle-bound archers, plus fully-upgraded walls around it, are enough to hold off pretty large troll hordes until dawn, allowing you to build and maintain further walls.

Once you reach that point in the gameplay, it becomes a pretty easy (and rote) matter of maintenance, rebuilding outer walls and re-recruiting frightened peasants.

Do the peasants pick up coins for me when I'm not around to grab them? If not, I certainly hope they use them to upgrade themselves or something. I'd hate for the gold I miss to go to waste :(

Got to day 28 relatively easily before getting infuriated with the facts that walls offer almost no protection thanks to trolls STACKING, trolls - even small ones - one-shot everything and are almost invulnerable, and scythe-users are utterly suicidal.

I had workers run outside the walls in daylight, then spontanously die in open ground, leaving me with nobody to rebuild my walls.

I just survived level XIX. Methinks my scythers or someone in my troops would have learnt to cut the bridges by now...

Is there anyway to "beat" this game or do you just try to survive for the longest possible time?

My impression was survival, but I could never make it past day 8.

Well for me after restarting again and again and again for two days I finally got to the seat spot of the game now I have more gold then I can use to the extent that I sprint fast past my own farmers so I don't get the gold they drop for me because the gold drops out of my full purse and sometimes drops in to the water.

Basically I didn't expand at all but just fortified my two walls and towers and recruit early in the day everyday.

Also I didn't upgrade my keep for a while because after you get the stone keep you only get 1 gold a day from the chest.

I didn't build any farms and just let my archers farm the rabbits around and when I had like 50+ archer on each wall I could survive anything the night throw at me.

Then I picked one wall and started expanding, built a new wall and two farms in between the walls, after that it was just silly, I even got to one of the hell gates and demolished it after some intense all day fighting for 3-4 days.

try cutting trees down around the little hobo camps leaving a tree on either side so you can wall them off it'll give you farm-able population so as long as the area remains between at least two trees also about six builders and your good for the rest of the game just keep gathering more archers and only occasionally splurge on a farmer and no matter how much equipment costs for the king give the trader four coins and he'll fill up one market stall each time (seems to favor the scythes but still pretty random) in this way i survived about 35 days until i stupidly destroyed two portals one after the other causing a huge difficulty spike my admittedly sizable army simply wasn't able to contend with the game is very grindy and does not reward impatience so take it slow hope this helps :)

p.s. try using the statues they give you huge buffs expensive but they pay off in the long run