Ready to get dragged into an undeniably captivating strategy and resource management building game? Kingdom Chronicles by Aliasworlds casts you in the role of humble do gooder John Brave, resident unlikely hero hero. I know what you're thinking, been there done that. But wait! It's not only about being sexy and knowing it while having damsels in distress swooning in their tallest tower prisons. I promise. 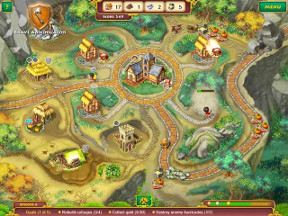 John Brave arrives in his native land after a long voyage to discover the sinister Moomrabac has nabbed the throne from King Edward and locked him away, and poor Princess Jane has been snatched and imprisoned as well. So, unlike us regular people who would probably scamper off somewhere to drown our sorrows in some unhealthy substance or another (hello cookie dough), John Brave takes it upon himself to right the wrongs of the treacherous Moomrabac. Town by town, quarry by quarry, troll by troll, it is your good fortune to be in charge of fixing the problems for those who would otherwise grumble about autocracies and being oppressed.

At the beginning you're presented with a map showing the winding path you must travel to rescue the realm. Similar to games like My Kingdom for the Princess, Rescue Team, and Roads of Rome, you need to guide groups of workers to gather items, including logs, food, gold, and stones, build buildings or clear the road of troublesome debris. Resources you gather can be used to repair or upgrade structures in each level, allowing you to erect lumber mills, houses that earn rent, town halls, stone quarries, and so on. Later, you even have to fight off barbarians and hire clerks to collect rent!

Each level comes with a set of tasks you must complete in order to proceed. The faster you complete the stage, the better reward medal you'll get. The strategy comes from choosing which order to perform tasks, as it's not always a completely linear path from A to B. Should you clear the stones from the road first, or go ahead and set up the farm to create food? How about guiding the workers, which tasks should they focus on, and how efficiently can you direct them? It's a little bit of simulation and a little bit of time management, and it all falls together in a perfectly handsome way. 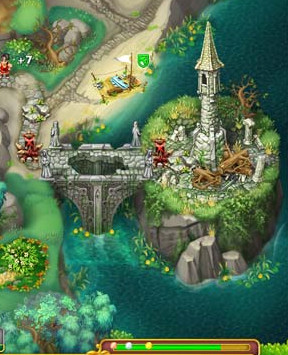 Analysis: The "building" genre has become more and more crowded in recent years, with a few very big series taking off and attracting everyone's attention. So how do you make yourself stand out in a world filled with Build-a-lots? You do it by making smart design decisions. Kingdom Chronicles was created for players and fans of the simulation building genre. Things like workers pausing after completing a task in case you have another job for them or the extra-handy queueing system that allows you to chain together actions so you can focus on the game, not where your minions are, really make a difference. The handful of little gameplay tweaks along with the game's flawless presentation add up to something very big in the end.

Kingdom Chronicles has that "just one more level" ability to keep you clicking until way past your bedtime. With several hours of content available it's easy to immerse yourself in this world that seems to be abound in resources. The game pacing is perfect for beginner and expert alike because it starts off easy but increases in difficulty towards the end, especially for those who really want to make it through with all gold medals. Different achievements add another layer of fun because getting that little medal mid-level fuels on that resource collector in you. The cartoon graphics are endearing and the plot lines are worth reading if you need a good chuckle.

For those newly introduced to this genre or those who are seasoned veterans, Kingdom Chronicles is a fun reminder of how good a resource management game can be. Sure, you may feel like you've collected that stupid log more times than you can count, but then you upgrade your quarry and bam!, you're back in full swing. If you're looking for a game with a silly narrative and gameplay that will keep you glued to your computer screen for longer than you should ever admit to then look no further!

As you progress through the game, you will collect Trophies that will be shown at the end of each Episode and can also be viewed from a link on the Main Menu.

Episode 27: The Bridge of Heroes

Episode 39: The Sword of Black Pond

As you progress through the game, you will collect Trophies that will be shown at the end of each Episode and can also be viewed from a link on the Main Menu.

Episode 27: The Bridge of Heroes

Episode 39: The Sword of Black Pond