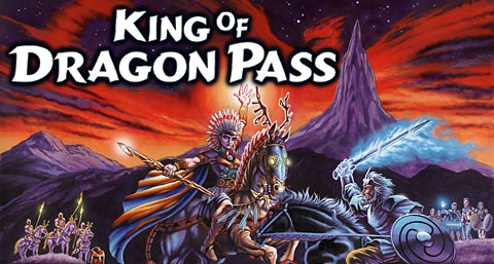 One part strategy, one part text-driven choose your own story adventure, King of Dragon Pass is exactly the game you want to lose yourself in. Ported to iOS from the original PC/Mac release of 1999 (and recently packaged into a Windows-friendly release by GOG.com), this storytelling experience is rich in its own history and affords you a vast amount of control over what happens within. Wage war, explore the land, trade with your neighbors, manage your tribe, and read pages upon pages of text explicating the world you're actively participating in. It's great to see a title like this brought back for a new wave of gamers to play, and it works quite well on the iPhone platform. 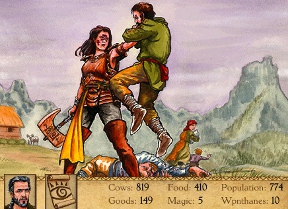 King of Dragon Pass aims for a high measure of realism, allowing you to make the decisions you wish to make but building related consequences around every choice. There are no sudden endings, cheap plot tricks, or moments when your hand is more than forced to taking a particular option. You're in charge of your tribe, and you must run it like your ancestors would have (which, awesomely enough, is also based on choices you make). All of this is done using text and still images, both of which paint a deep, riveting picture of the world you're interacting with. It's more like a text-based version of Civilization rather than a limited-scope Choice Of game.

After spending some time customizing your tribe's history by participating in a few rounds of questions, the game begins with a short tutorial that takes place while you play. You're walked through a few bits of the tale first, then turned on your own, a wide world of strategic possibilities at your disposal. Do you take to exploring or try to conquer your neighbor? Listen to your advisors or go ahead and trade with your enemy? It's up to you, but the consequences are very real.

The mobile game comes with a manual you can read inside the app (the GOG download features a separate manual), and for once, you should seriously consider reading it. You have to manage things from population, how to get food (trade? farming?), where your clan's wealth comes from, which neighbors owe you favors and who you owe favors to, battles, and diplomacy to an extreme level of detail. There are so many choices to make you'll immediately worry you're doing something wrong. As the game reminds you early on, however, there are no "right" or "wrong" choices, just different ones. So read the manual, stay true to your clan's history, and don't act like a jerk! 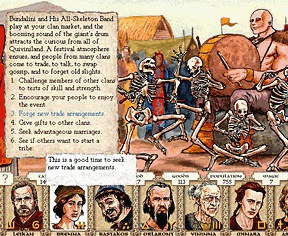 Analysis: Video games, according to everyone wearing those retro-colored glasses, have done nothing but lose depth and intrigue in the modern times. It's hard to argue that when a game like King of Dragon Pass is resurrected. It has more text than a work of interactive fiction and more strategy than any casual strategy game out there. The replay value is very high, as each time you play you're almost guaranteed a different experience at every turn.

Text ages very well, as we've been reading the same sort of words for hundreds of years. In this respect, King of Dragon Pass could have been released as a new game last week and no one would have been the wiser. Some of the archetypes are a little too familiar now, what with the fantasy genre exploding over the last decade or two, but that never detracts from the overall experience. The artwork holds up almost as well, as everything was hand-drawn and filled with detail.

Drawbacks? If a steep learning curve scares you or if the phrase "read the manual" makes you feel sick, King of Dragon pass isn't your thing. If you don't mind doing a bit of reading and research to play your game, step right in! It's worth noting that King of Dragon Pass carries a steep price tag for an iPhone game (the download version is much less expensive), and it looks like an iPad release isn't possible owing to the nature of the original artwork. Slight bummers, if anything, but almost inconsequential in the shadow of the colossal game we now have at our fingertips.

King of Dragon Pass is a difficult game to do justice to in a short review. If you can imagine a game like Civilization played out in a text-based, choose your own adventure world, you have a good idea what to expect. It worked well over a decade ago, and it works well now on mobile devices. If you can read, you should play King of Dragon Pass.

I am absolutely flabbergasted to see this here. KoDP is one of the best role playing games ever made, and I'm not exaggerating. I played this for months back in the day, will be buying again. Worth every penny.

I want to second the guest's recommendation and pleasure at seeing this game here. It is, indeed, one of the best of its kind, and probably almost unique in its exact mechanics and feel.
Glorantha is a setting which deserves more attention from a wider audience, and this game might help to encourage that. An interesting side note to the review is that the game's largely text-based nature lends itself very well to play by the blind, who have enjoyed unparalleled access to iOS devices for a couple years now. The current version is not yet fully accessible, but a future version hopefully will be, and then I'll finally get to enjoy a game I've wanted to play on my own for a very long time.

I'm still stunned at how "real" this game is. I've been doing a lot of researching about interactive storytelling lately, and this game makes me rethink many of my assumptions. Which is a good thing!

JohnB, I'd be interested to hear what assumptions you refer to and how KoDP makes you rethink them. Perhaps a topic for another post, but consider me intrigued.

Telling a story is one thing, playing a game is another. It's extremely difficult to give the player freedom of choice while still communicating a plot written by an author. So many choice-based games fail at this, and it's a difficult line to walk. How do you let someone make choices while you try to illustrate the drama of a character(s) making choices? With KoDP game, the world becomes a character, which I've been thinking is the only way to make something like this really work. You either tell someone a story, or you create a (text) world filled with stories to explore and they find their own drama.

Very happy to see this brilliant game get a second chance to find an audience. It is one of the best and most creative games I've played, in any genre.