So, good news! You're not dead anymore. Oh, but bad news... you're a shambling undead monstrosity with a thirst for brains... and sweet, sweet moolah! King Cashing 2 for iOS by Productions Mulitmage is a bizarre, glorious hybrid of slot-machine and RPG where you control a King and an army, where both just happen to be zombies. See, in the original King Cashing, you were your typical flesh and blood noble king out to quest and get rewards, but now you've risen from the grave thanks to some meddling agents, and you figure, hey, times may have changed, but kings still have to conquer... even if they are all, uh. Rotting and junk. So you'll journey across the land through a series of quirky graphic novels, doing battle via the reels to earn coins, level up, and add to your army and your arsenal with everything from sexy (um... ) zombie cyborgs to vicious attack pigeons. And yes, it might be weird, but it's also kind of glorious. 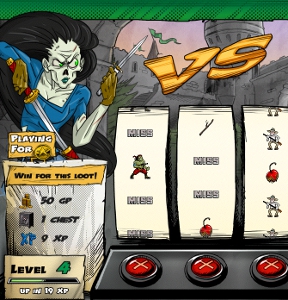 In concept, the game is simple. You duke it out against enemies by playing slots, and you only deal damage against their hit-points if either your warriors (first reel) or weapons (second reel) line up with one of your opponents on the third reel. If they do, the damage you do can increase depending on whether you've got a zombie paired up with a weapon, and even double if that weapon is actually that zombie's preferred attack of choice. You can hit the big red button to stop all the reels at once, or hit the smaller one beneath each individual reel to stop them one at a time. Of course, you can't spin forever, since that would be too easy. Spins cost three cherries, and if you run out of those, you'll have to quit the battle. The penalty for doing so is essentially that battles cost cash to engage in, and if you fail, not only do you not get any swank treasure or experience points, you also lose the money spent to fight. Fortunately, as you level up you can apply skill points to your units to increase their base power, and even spend your hard-earned gold on things like more zombies, better weapons, and bonuses.

The style of King Cashing 2 is so drastically different from its predecessor that it seems like a joke, but if it is, it's a darn good one. The tongue-in-cheek design and premise seems like a perfect fit for the strange gameplay concept, and the sort of wonderfully weird thing that makes for such perfect casual mobile gaming. What's sort of wonderful on its own is that the concept behind the game sprung from the developer playing Kairosoft's immensely addictive Game Dev Story, when they were presented in-game with the option of making a slot/RPG game and wanted to see what that sort of title would look like in real life. Turns out? Pretty great. There will be quite a lot of grinding for levels and gold, and despite having certain enemies be weaker or stronger against various units there may not be enough strategy to keep some players involved beyond the sheer wackiness of first infatuation. But it's still a fantastically clever game that executes its simple premise exceptionally well, and does so with a great sense of style and ghoulish charm. If you like your games unique and on the strange side, King Cashing 2 is a gorgeous, wacky way to pass the time and conquer the world.

Really, nobody should miss this game. It is one of the best mobile games I've ever played. Unique, deep, fun, funny. And no in-app purchases or any nonsense!