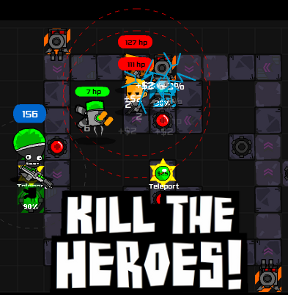 You awaken in a strange room with no memory of who you are. The objects in the room make you think, 'Hey, I must be an evil mastermind with plans to take over the world!", so you have no choice but to continue your ventures. You wouldn't want to put that big ole brain of yours to waste, now would you? Before you know it, heroes start invading your facility. In Nerdook's Kill the Heroes, you do just as the title suggests (demands?) in a tower defense fashion by using your mouse to place units and purchase upgrades. Ah, the old fight between good and evil, there's no way you're letting good win this time!

Heroes cycle around the board of a given level, shooting at you as you come into range. As they follow the path, you can place obstacles and attack units to slow them down and deplete their health all while you keep an eye on your own shield count. While you only have five different units at your sinister fingertips, each unit has several upgrades you can purchase for it after unlocking them. The units themselves and their subsequent upgrades are bought with your hard earned cash whereas the unlocking of upgrades is done with the stars you earn after completing a level, the number depending on how unscathed you came out of it.

As you progress through all 21 levels, the heroes become better armored, sharper shooters and more numerous in the form of multiple waves (referred to as reinforcements). The pace and manner in which you're informed of these additions work well, allowing you to adjust your strategy without feeling overwhelmed. Plus, who could say 'no' to a sweet, old former Kindergarten teacher turned evil assistant?

Much like another of Nerdook's titles, Kill the Heroes gives you much satisfaction in taking out the good guy. Hey, after all, they stepped into your territory. They should have paid more attention to the 'Trespassers Will Be Shot' sign.

I'm pretty sure I'm the only super-villian in the world who says yuperdoodles. ^_^ Great game, although I hate games that withhold content, telling you to play on another site. Like I'm seriously gonna head to Kongregate and start over, even if I'm only six levels in.

But the Kongregate thing is irritating. By the time I realised content had been locked out, I'd advanced too far to restart.