Kid Tripp is an auto-running retro-style platform game created by Not Done Yet Games. It borrows some gameplay elements from the endless running genre, though really it's more of an old fashioned action game you might have found on the NES or Sega Genesis. It's simple, it's extremely challenging, and it's filled with chunky pixel artwork that perfectly defines the game's quirky sense of humor. 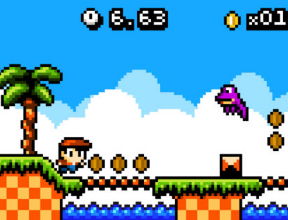 Flying his little airplane one day, Kid Tripp quite literally runs into a giraffe. He crashes on an island where it seems every creature is out to get him. The screen scrolls on its own and Kid Tripp runs at a steady pace. Tap the right side of the screen to throw a rock, a move useful for taking out birds, fish, frogs, coconuts thrown by monkeys, and all manner of other foes. Tap the left side of the screen to jump, useful for clearing small gaps and collecting all those shiny coins floating in mid-air.

Kid Tripp keeps everything as straightforward as possible. No crazy in-app purchases or strange gimmicks to trick you out of time or money. Just seriously challenging platforming action, all controlled with two simple taps on your device's screen.