In the world of "free to play" games, few are as immediately recommenable as Failbetter Games' Fallen London (originally Echo Bazaar. Part interactive fiction, part surreal steampunkish horror mystery adventure RPG, it offers players a unique and immediately engrossing world with tons of style, charm, and stories without constantly badgering you for money. So would you be interested in a roguelike RPG adventure set in the same world but with gameplay inspired by FTL: Faster Than Light, Don't Starve, and more? Then perhaps you should check out the Kickstarter for Sunless Sea, for PC and Mac planned to release in 2014. 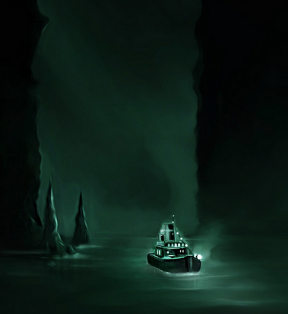 The game puts you in charge of a steamship, complete with crew, exploring the depths of the Unterzee, a "sunless sea" deep beneath the earth filled with treasure, adventure, and danger. There are multiple reasons your character, who you'll create from scratch and can look like or be anything (male, female, or neither!), and as such you have multiple potential endgames to reach... if you survive. You'll have to manage your ship carefully, taking care of the people who make up your crew and maintaining supplies, as well as handling combat, learning new skills and abilities as you grow. But it's not just the risk of starvation, madness, or enemies... Sunless Sea's focus on story and consequences means that every single choice you make can have a myriad of influences on the game itself, and the options available change depending on how your character is structured. Romance? Ghost ships? Giant crabs and crewmates driven mad by hunger and terror? Awwww yissss. Of course, once you die, that's it. You'll have to start all over with a new crew, ship, and captain... but perhaps you'll be connected to your old character's legacy in an unexpected way...

Failbetter Games is an exceptionally talented and creative crew, whose dedication to their flagship title, Fallen London, has been remarkable to see as they continually work to add new content to an already engrossing way and deliver the best possible experience for players in a way that incorporates their feedback. They definitely seem to have both the ability and the resolve to take on this project, and their planned/possible expansions could add a lot more to an already ambitiously awesome looking project. It is, however, worth mentioning that they cancelled BELOW, another Kickstarter/Fallen London project in late 2012 when it was clear the game would not reach its funding goal, but in that case all pledges were cancelled and no backers were charged money for it as well.

You can donate whatever you like to help fund the game, which is asking for roughly $93000.00USD, and a donation of $16.00USD gets you a DRM free copy of the game when it releases next year for the platform of your choice and any expansions free of charge. If you want to find out if this is a world you want to explore, trying the free online game (registration required) the game is based on, Fallen London, is a great place to start. If you want to know more, head on over to the official Kickstarter page!

This looks awesome. I really hope they reach their funding.