WayForward has been in the business a whopping 23 years with over 200 releases under their belt, most recently nostalgia-hammer DuckTales: Remastered, and now they aim to bring the star of their hit iOS game, Shantae: Risky's Revenge, to PCs and consoles everywhere in an entirely new adventure with the planned Kickstarter for Shantae: Half-Genie Hero. Gorgeous visuals? Quirky gameplay? Cheeky characters and story? Classic platforming action with an adventurous Metroidvania flair? Awww yisss, sign me up! 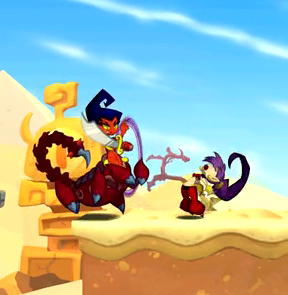 As you'd surmise from the title, the game stars Shantae, who is in fact half-genie, and sets out to stop the arise of an ancient evil that visits her in a dream. Shantae doesn't quite have semi-phenomenal, nearly-cosmic powers, but she does have an impressive arsenal of tricks to go along with her platforming prowess, such as the ability to use her ponytail as a weapon, belly-dance to transform into different beasts with unique powers, upgrades, and more. At the moment, the game is planned for three chapters (no word on how long those are), but the team has some truly ambitious stretch goals planned if their funding really takes off... such as the ability to play as Shantae's arch-nemesis, the pirate maiden Risky Boots, in her very own full campaign with her own unique abilities.

Shantae has been around for a long time, even beyond her iOS hit, having originally had her own adventure way back in 2002 on the Game Boy Color, and WayForward definitely has the talent and expertise to see this project through with their long history. To say the game looks gorgeous is an understatement, and with the constant demand for games to innovate and dazzle, it's easy to forget that classic platforming adventure, done well, can dazzle just as well, and is something we don't see enough of anymore. If that sounds promising to you, then head on over to the official Kickstarter page to learn more and check out a teaser video of the game in action!

I do wonder how this will fit into the canon storyline. After all...

...at the climax of Risky's Revenge, Shantae lost her "half-genie" status and became a full human.

Nitpick, guys: Shantae's first game came out in 2001, not 1994! The dev company had merely been designing the game (or at least different versions of it) since 1994.