Sarah Northway makes magic things happen, and her smash hit survival/strategy/simulation Rebuild series about trying to restore some semblance of society in a post-apocalyptic zombie-riddled world is proof positive of that. Mixing secrets, excitement, and tons of events for endless replay value, they're exactly the sort of games that are most dangerous to your free time... and in fact as soon as I remembered I hadn't played Rebuild 2 in a while I did so for a few hours before I also remembered that I was supposed to be writing this article. Because next year, the third installment is finally on the way, and now's your chance to help fund Rebuild: Gangs of Deadsville with this recently launched Kickstarter. 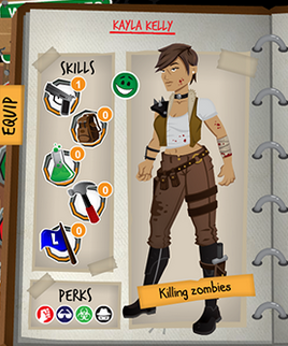 What sets the Rebuild series apart from every other zombie game out there has always been its intelligence and its variety. In addition to managing groups of survivors with skills and inventories to scavenge for supplies and fend off zombies, you can also grow food, convert buildings into new locations with benefits (like research labs), and discover a wide variety of endings, some more obvious than others, ranging simply from escape to uncovering a new, deadlier way of life. Gangs of Deadsville promises to keep everything we loved, from the humour to the complexity, but make this the biggest title the series has ever seen... according to Sarah, she's spent more time working on this than Rebuild 1 and 2 combined, and it's only halfway done! This time around, you'll find yourself travelling through a variety of cities, contending with new NPC factions you can trade or go to war with, more skills, facilities, politics, things to research, background stories, all-new events and endings, and even a real-time option for those of you who think you can handle it. All of that, of course, is on top of a rather massive visual overhaul that brings with it tons of UI improvements.

This does mean, of course, that this will be (apart from the mobile ports) the first Rebuild title that isn't free, but trust us when we say the series has been worth your time and money for years now. Gangs of Deadsville represents an enormous amount of dedication and passion from its creator, and promises to provide everything fans loved about the original games, but more of it, and with the improvements players have been asking for to boot. 2014 can't come soon enough, but in the meantime check out the official Kickstarter page to learn more, or play Rebuild and Rebuild 2 free online and help make the latest game by a devoted developer who's given us so much free amazing content a reality.

The first kickstarter I have ever backed. Just too excited NOT too! :)

I love the Rebuild games!! Woot! Thank you for finding us good indie devs to support. I think Kickstarter is a great way to get a project off the ground.