"Thomas Was Alone meets Analogue: A Hate Story meets System Shock"? Hmmmm. Typically when a game is described as being "Some Popular Thing meets Some Other Popular Thing", I make my Marge Simpson noise, though bias-generating comparisons aside, Nick Yonge's (krangGAMES) Kickstarter for his upcoming story-driven action adventure game Emerald still looks pretty swank. Trapped inside a dead ship with no functioning systems, you have to explore the massive hulk in zero gravity as you decide which support systems to reactivate to determine your survival, and slowly piece together the story of who you are, your mission, and what went wrong. Sound intriguing? You bet your gradually depleting oxygen it does. 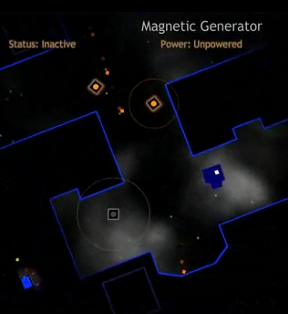 The game plans to be geared towards an exploratory experience, with just as much focus on finding scraps and secrets pertaining to the story as reactivating the ship you're stuck inside. The concept of figuring out what's happened and why, as well as the aesthetic in some ways, reminds me a bit of Yonge's earlier game Prior. Story-centric games that rely on the player discovering and piecing together that story can be tricky to do, since unless you railroad your player on a specific route, you can't predict what they'll encounter and, perhaps more importantly for coherence's sake, in what order they'll encounter it. But Yonge has already proven himself more than capable of telling compelling stories in bits and pieces, and Emerald's promise that every bit of text will have meaning could allow you to craft a story around yourself rather than following a specific breadcrumb trail to a neatly packaged conclusion.

Of course, experiencing flashbacks and story is all well and good, but you need a game to tie all that together, right? Fortunately, Emerald looks like it will more than satisfy in that regard as well, tasking you with finding and figuring out how to repair what systems you need, avoiding hazards, and even tracking down a ton of secrets scattered throughout the ship, in addition to deciding what you're going to do with the information you uncover. Throw in a melancholy atmosphere and simple yet evocative visuals and you could have the recipe for a genuinely captivating experience. If this sounds good to you, head on over to the official Kickstarter page to learn more, or play Yonge's free games to get a taste of his game designing talents... trust us, he's got them in spades, and this could be something special all on its own. No comparisons needed!

I'm very glad Jayisgames is featuring Kickstarter projects again! But it surprises me to see so few comments (if any) when it happens! Although I've been a follower for a very long time, just recently I've fought inertia and decided I should register and participate. As far as I'm concerned, no more Kickstarter entries devoid of commentaries around here. :) Thanks for so many nice picks, Dora!