Normally I get nervous when a Kickstarter project starts using old school nostalgia as a selling point, but since we're talking about Zeboyd Games and they do "old school" better than pretty much anyone, it's time to get excited instead. Cosmic Star Heroine, their upcoming turn-based sci-fi RPG, will star Alyssa L'Salle, a top-notch galactic government super spy who finds herself suddenly in the spotlight when she stumbles across a conspiracy she was never meant to find... which means that now everyone she's ever tangled with knows her name and face and is out for blood. It's like Peter Parker's worst nightmare, only instead of an elderly aunt Alyssa's got an upgradeable super spy headquarters she can recruit other characters, customiseable party members, combos, and more! 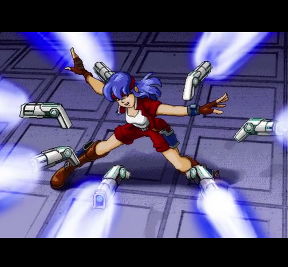 Zeboyd cites inspiration from gaming classics like Chrono Trigger, Suikoden, and Phantasy Star (it's not just me... Alyssa looks like Alys Brangwin, right?) for Cosmic Star Heroine, and just a glance at the screenshots will probably tell you why. The team has always been about striving to keep the things you loved about classic games intact (the stories, the gameplay, the sprite-based visuals you love more than any polygon), but tweaking that classic gameplay to remove some of the common frustrations. Cosmic Star Heroine, for example, promises to keep the pace of the story moving quickly, while allowing you to save anywhere and removing the need for hours and hours of grinding these classic JRPG-styled games tend to be (in)famous for. They also promise "intricately designed encounters to make each battle its own challenge", which is something we saw from them in On the Rain-Slick Precipice of Darkness: Episode Four, which had each battle crafted in such a way as to feel like it needed its own strategy rather than a simple random encounter.

You can check out the official Kickstarter page for more info, and get a glance of the game's 1980's Anime-tastic cutscene style in the presentation video, but if you're into science fiction, noir, JRPGs, and any combination thereof, this should definitely pique your interest. Zeboyd Games is made up of people with a passion for gaming and their dedication to the craft and their love for the old-school RPG genre has seen the release some of the best classically-styled games in a long time. They understand that you have to do more than simply play to nostalgia to make a "retro" game a winner, and with an intriguing universe, challenging and strategic battles, and enjoyable character (and home base!) customisation, Cosmic Star Heroine is shaping up to be a winner indeed.