More pachinko, anyone? Kickin' Momma is the latest from Hothead Games, the team that is perhaps most famous for creating the Penny Arcade adventure episodes beginning with On the Rain-Slick Precipice of Darkness. Now, though, the studio is focusing some efforts on the iOS market, creating a crazy sort of game that's very similar to Peggle. 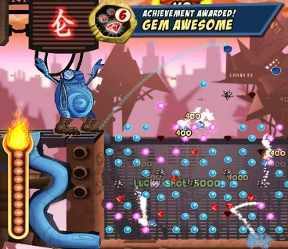 The story centers around the momma monster who is in love with a dazzling jewel necklace. She can't afford it, though, so to make enough cash to purchase the bauble, she decides to take her offspring (swarmites) and boot them off the edge of a cliff, causing them to fall, strike pegs, and hit gems that are transported back to momma's bottomless pockets. Simple, and mildly disturbing, but it's all done in good cartoon fun, so there's no need to hide the children.

You can succinctly describe Kickin' Momma as "horizontal Peggle with monsters instead of balls". That's pretty much the gist of things, and it's easy to jump right in to this game without much practice. Tap the screen and slide your finger to take aim, using the arrows on the left side to fine-tune your trajectory. When you're ready to fire, press "kick" and send that baby flying. Monsterlets strike pegs just like in any pachinko game, and when they finally hit the bottom, your score is totaled, pegs are cleared, and any gems you touched are vacuumed right up.

Later levels introduce new pegs with some interesting effects, such as splitters that spawn multiple monster babies when struck, explosive pegs, fire, rock, and ice pegs, etc. You have to work through a good chunk of the game's 36 levels to find these different pegs, which is a bit of a letdown. Fortunately a few cosmetic unlockables give you something to strive for apart from obtaining a high score. There's nothin' like seeing a big blue momma monster with a monocle, boots, and mustache! 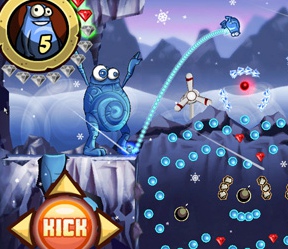 Analysis: The most interesting part of Kickin' Momma? How utterly surreal it can be. First of all, the premise is mad. A monster booting her babies down a cliff so she can buy a necklace? For real?! Next, momma likes to dance, and you'll catch her busting some moves while her children are bouncing around the side of a cliff.

Luck is more of a factor in Kickin' Momma than raw skill, though that doesn't mean you can kick those swarmites all over the place and still come out victorious. Peg placement, where gems fall, and what happens after the first few ricochets often seems totally random, and more than one time you'll watch a shot fall completely flat after thinking it would be a big points winner. The window in the upper left corner of the screen lets you adjust your moves with great precision, so use it, live by it, and think before you kick those babies!

If there's anything "wrong" with Kickin' Momma, it's that it's a bit too similar to Peggle for comfort, and it doesn't really add anything new to the genre. In fact, the game is too sparse in some areas, featuring very little variety, a low level of challenge, and relatively few stages to complete. There's space for a new world in an upcoming update, so hopefully this will add some much-needed variety to the game.

Kickin' Momma scores big points for looking great and playing smoothly, and its blend of pachinko and arcade gameplay styles is a winner no matter how you cut it. If you're looking for a cute, no-stress game that's very similar to Peggle and lets you kick baby monsters all day, look no further than Kickin' Momma!

Am I the only one who noticed that the title resembles "Cooking Mama"?

SonicLover:
No, in fact I thought it was a parody.