Kentucky Route Zero: Act I is a curious mash-up of an old school adventure game and a cinematic text adventure. Created by Cardboard Computer (which includes A House in California developer Jake Elliott), the game is packed with phenomenal visual and sound design, setting an atmosphere that's one of the most intriguing in recent indie gaming history. it's a bit like Twin Peaks meets a moody old school adventure game (on a dark night in the middle of Kentucky). 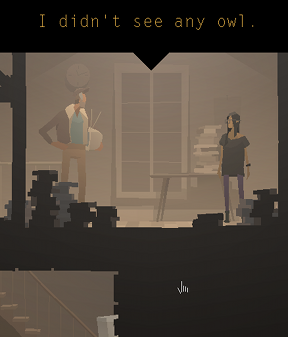 It all starts with Equus Oils, a gas station in the middle of nowhere, with Conway pulling in to ask for directions. He's making a delivery for an antiques store and wants nothing more than to find Dogwood Drive. According to shop's owner, though, getting to Dogwood means you have to find the Zero, a highway you learn is shrouded in as much mystery as, well, just about everything else you encounter in this quiet place. Information in hand, you hop back in your truck and hit the road, on to your next stop in the quest for information.

Gameplay is divided into two main sections: traditional adventure-style scenes and driving on the game's road map. The former are operated with a nice point-and-click interface that showcases areas of interest with stylish vector-like icons that only appear when you're nearby. Multi-path conversations allow you to choose a variety of responses, most of which seem to lead to the same conclusions but give you different fragments of information along the way. There are no puzzles to speak of, nor is there an inventory. It's just you, your truck, your dog, and a handful of incredibly abstruse people. 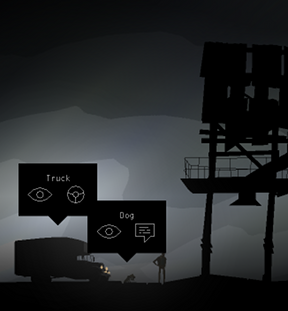 When you're on the road, point-and-click controls also apply, but here you only see a rough map of the countryside. Occasionally you'll come across side quests that play out like a short multiple choice text adventure. They don't have anything to do with the main events of the game, but they definitely set a stronger atmosphere, and Conway can encounter some really odd locations by driving around the place.

Analysis: Kentucky Route Zero is a very cinematic experience that puts any sort of puzzle solving elements far into the background. It's a game about setting and atmosphere, careful writing and mysterious plotlines. It couldn't take place in the daylight, it couldn't be set in the bustling streets of London. Information is doled out in precious droplets that you horde and protect like water in the desert. For this reason, upon completing the game you'll almost immediately start over again. What if you were a little less straightforward with certain characters? What if you took a different path in the mines? And what the heck are those guys doing with that airplane?!

Kentucky Route Zero is on the short side, clocking in at just around an hour's worth of gameplay. This is lengthened somewhat by replays and optional events you'll inevitably seek out. Keep in mind this is just the first of a planned series of five acts set to be released over the course of 2013. More is on the way, and more is exactly what you'll want when you reach the end. This is the sort of game that stays with you after you walk away.

Wow, I haven't tried the game yet, but the trailer looks amazing, and the description above is so intriguing. I'm excited!

This does look amazing, and kudos to the devs for releasing on all platforms. Seems pricey for an hour's worth of play, and that's certainly a barrier for many of us, unfortunately.

Just downloaded and played to act IV. This game is intriguing to say the least. Adventure games are making a great come back, and this one is pretty interesting. Fueled by an unraveling mystery, it keeps you going to discovery the mysteries of the story line as it's not immediately revealed to you, nor is the plot or goal of the game, which make this game a joy to play and discover as well as take in the atmosphere of it all. Very cool game, and awesome art style.

Correction: Played to Act I: Scene IV, rather. Act II-V are not yet released.

8,052 Views
10 Comments
chrpa— Jayisgames needs your help to continue providing quality content. Click for details The beautiful warderobe bought cheaply at the local market had one flaw - the seller didn't have the key. But then a miracle happened - after river fishing,...  ...