Keeper of the Grove 3

In booblyc's Keeper of the Grove 3, the latest installment in the bright tower defense strategy series, everyone wants to go green, but some, like the evil sorcerer sending his minions to swarm your magical grove and steal its protons, have a weird idea of what that entails. Naturally, this cannot stand! You need your protons for... stuff!... and thangs... so you'll have to enlist the help of the land's protectors to drive the evil forces away. In each level, use gold gained from defeating enemies to place defensive critters along the paths to protect your protons from being carried off. It's a little like Cursed Treasure in that you're trying to protect your jewel-like protons from being carted off, but here at least if you slay an enemy trying to abscond with one, you can pass your cursor over it to send it back to your cache. Need a little boost? Then activate the single-use powerups when you find them from slain foes to activate helpful spells like flames! Each defensive unit has different abilities, and while they can be upgraded during battle to be more powerful, you'll want to spend any gems you earn to permanently boost your skills between stages. If you really want to make your defenders powerful, however, you'll seek out the Stones of Knowledge in levels and pay them to unlock new defender upgrade types. You'll know them when they see them... they look like such big, strong hands, don't they? 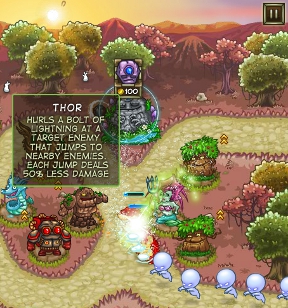 Though it may set itself apart visually from the original Keeper of the Grove and the sequel, Keeper of the Grove 3 is still largely the same beast. You have your fast towers, your slowing towers, your slow-but-powerful towers, and the towers that light things on fire. It's a formula, sure, but it works, thanks in no small part to how great the game looks with its eye-catching storybook visuals. The levels feel like they drag just a biiiiiit too long, often leaving you with piles of cash, fully upgraded defenses, and little to do but watch the next four or five waves play out. Elements like the Stones of Knowledge or the limited-use spells are a nice attempt at making things a little more challenging, but on the whole, the game is still easier than a lot of defender titles, largely because the only difficulty mode is "easy" unless you're playing at the sponsor's site to unlock "hard"... doesn't it feel like there should be a tier between the two? Still, it's a well made game from toes to crown, with a variety of enemy types to contend with, and increasingly complex stages with twisting paths and different points for enemies to appear on. Keeper of the Grove 3 is an engaging little tower defense with a fantastic presentation and a lot of thought behind it, making it fun for both newcomers and fans alike.

Play Keeper of the Grove 3

Playing this on "insane" really makes it really shine with strategic depth; You don't have too much money left over, and most tower placements have to count, every tower has reasonable utility.

I prefer the more simplistic graphics of the first game though. I feel those were more elegant. There are imaginative ideas here, but the art doesn't look as polished as Kingdom Rush or Cursed Treasure. It can sometimes feel a bit fourteen-year-old-piling-on-more-koolz-visual-elements, but at least the art here isn't as bad as the previous installment.