So, don't ask too many questions, but someone needs an eye and we're going to get it to them. What do they need the eye for?...That's a question, isn't it? Anyway, Dim Light, Black Ash and ArcadeHero have enlisted the help of some cute little creatures to help you Keep An Eye. In this surprisingly difficult puzzle game, you don't get to control the eye directly. Instead, hold [Z] to activate the ability of the creature nearest the falling eye, and use physics to keep it from hitting obstacles more than a few times. Red creatures will swing the eye like a pendulum, green ones will pull the eye toward it, and blue ones will temporarily freeze the eye in place and make it invincible. You can't influence gray air creatures directly, but if the eye hits one of them, they'll bounce it in the direction of their air flow. A few levels in, you gain an extra set of powers. If you press [X] while you have a creature active, that creature's power is reversed. Get the eye to the vortex at the end of the level to advance. 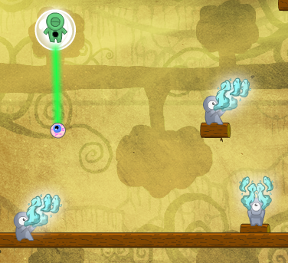 Though there are only 16 short levels in Keep An Eye, they're quite challenging, and many of them will have you pressing [R] to restart quite often until you figure out what to do. There's a lot of split-second timing in the game, but the peppy music and adorable artwork help distract from any frustrating bits. The physics of the game are solid and consistent, which means the challenge remains in the game itself instead of fighting with the game engine. As a bonus, the fact that the creature nearest to the eye at any given moment is highlighted in white means you don't have to guess about what's going to happen when you press the button. Keep An Eye is engaging, entertaining, and probably a much nicer thing to do than throwing a real eye around.

Great mechanics and very difficult. Any eye bank would be appalled at my eyeball loss.

Very nice game - don't see how anyone could earn the achievement to only die 3 times... :) Looking forward to more levels!