At least some thieves go and make a name for themselves by stealing priceless artworks, legendary cultural relics, or jewels the size of fists. But the lowlife band of ruffians in Vitalii Zlotskii's Juicy Bazooka apparently have nothing better to do with their time than harass a poor, beleaguered homeowner by stealing his groceries. The nerve! Luckily for him, they didn't nab his watermelons... Or the specially-modified bazooka he fires them with! Shoot melons at felons and help him reclaim his stolen groceries in this puzzle shooter game. Just make sure no innocent bystanders get a face full of fruit! Gameplay-wise, it's a familiar song and dance, but it's hard to resist a game with such a good-naturedly goofy pretense... and such cute voice clips! 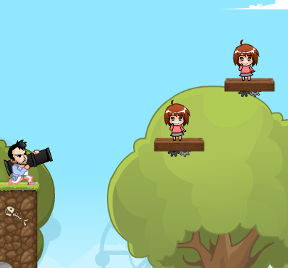 First and foremost, Juicy Bazooka is wholeheartedly charming. The thieves you shoot down have adorably growly voices and goofy taunts: "Buy more bacon next time, pretty boy!" And should you accidentally smack a little girl in your crook-clobbering rampage, she'll be so adorably upset, you definitely won't want to do it again. But although Juicy Bazooka has a great personality, it doesn't just rely on its jokes to make itself worthwhile. For one thing, its puzzles are pleasingly generous. Although you do have a limited number of shots to pass each stage with, it's usually a very high number, meaning the game is more than willing to let you experiment a little to find the proper solution to each stage. And experimenting is necessary, because a lot of levels revolve around using clever ricochets and trick shots to hit your enemies with. Although the bouncing physics are tight, some of the stages do feel a little luck-based, since they require bouncing shots off moving targets. It's difficult to be precise when there are so many moving pieces involved. But the rest of the stages rely on skillfully manipulating your environment or exact aiming, and there are a few legitimate head-scratchers in the bunch. Although never too difficult, especially due to the forgiving number of shots you have, the later puzzles in Juicy Bazooka are satisfying when they relent to your superior intellect and steady hand. It may not be innovative, but Juicy Bazooka knows how to do a familiar thing well. And it has so much fun being itself, it's hard not to giggle right along with it.

I like how the bad guys periodically lick the food they're holding, regardless of what it is. "What? Everyone runs their tongue over a banana before they peel it. You're the weird one."

I like how you don't have to use the absolute minimum shots and make them all perfectly to get 3 stars.

I liked this game. Especially the sound effects. Very satisfying when they hit their targets. I also like the lazer beam line of fire, so I didn't have to adjust the trajectory as the distance increased. Very fun. And a good write-up, too! But I think I'm far too immature to be playing a game called Juicy Bazooka with bouncy physics and pleasingly generous puzzles. LOTS of melons, too. See what I mean? I shouldn't be here.

@Snarfhead: On that note, the hero's ability to inhale food from across the level is impressive. I'll bet he could suck a golf ball through a garden hose.